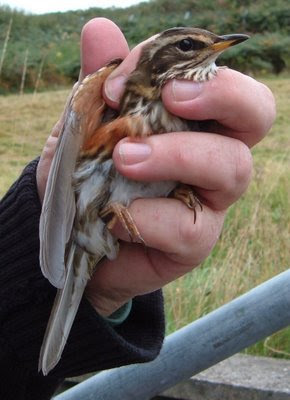 My impression is that there are far fewer Redwing so far this winter in the Warton/Silverdale area than in previous early winters, despite an abundance of berries. This raises the question do Redwing return to the same wintering area in successive winters? A few certainly do for last winter we retrapped a bird in the same roost that it had been ringed in the previous winter.

However our recoveries of Redwing ringed in mid winter show conclusively that they can winter here in one year and choose a different wintering area the next. To date we have had five examples of birds which have certainly changed their wintering area from one year to the next. One moved to Portugal, two to Italy and one to Greece. But the most outstanding recovery was bird with ring no CA 82363 it was ringed on 28.12.63 in a roost near Carnforth and recovered on 4.2.67 near Archivan Azerbaijan at 38 32 N 48'49E Not far from the Caspian Sea and almost in Iran. The down side is that all 5 were shot.

We have several other recoveries that show that Redwing can move south and west during a cold winter with recoveries in Ireland and France and also that birds ringed in autumn can winter further south in France.
Posted by North Lancs Ringing Group at 08:15