Kevin Briggs has just given me details of a colour ringed sighting of a Ringed Plover that he saw  on 22  June this year at Melling on the River Lune. It was originally colour ringed as a juvenile   on 10 July 1993 two kms from where it was sighted this year. Making it 21 years  11 months and 13 days old. It beats the  present oldest recorded Ringed Plover which was ringed as  an adult on The Wash and last recorded  19 years  8 months and 19 days after ringing.

Kevin has recorded this bird for the past four years breeding on  a maize field. This bird is part of Kevin's long term  study of this species breeding on the gravel  banks of the River Lune. He has another bird also ringed as a juvenile which was 13 years and 355 days when last seen also on a maize field.

The Lancaster and District BWS has censused the breeding birds of the lower section of the River Lune each year for the past 41 years. Ringed Plover have declined from a peak of 42 pairs in the 1970's to just  four pairs in  2009 due to  regular spring and summer  flooding  of the gravel  nesting sites.  This year nine pairs attempted to  nest but the only successful pairs were the four pairs nesting on maize fields.
John
Posted by North Lancs Ringing Group at 17:16 No comments:


The problem with Scandinavian Rock Pipit in winter is that many individuals are inseparable from our nominate Anthus petrosus petrosus (subsequently referred to as ‘petrosus’).  That has led to several  county and regional bird reports being  a bit reluctant to document Anthus petrosus littoralis unless this relates to individuals (usually in spring) which show a subtle combination of characters which suggest they are not petrosus (e.g. well-defined supercilium, ‘cleaner’ more individual breast streaking and noticeable white (not muddy white) outer tail feathers, with the more clear-cut individuals superficially resembling Water Pipit)

It has been increasingly apparent in this country that there is a quite specific outer saltmarsh habitat which does not 'proximately overlap' with rocky coasts and shorelines which has its own wintering population of Rock Pipits.  The problem with this habitat is that at many sites the birds are 'impossible' to watch closely and document unless there are high spring tides forcing them to the inner end of the saltmarsh within observational range.   Therefore opportunities to study them can be limited to just two or three tides per winter period month.  This is because they feed in the outer saltmarsh creeks and are very reluctant to leave this area unless the adjoining saltmarsh is completely inundated by the tide.  Birders also tend to ‘ignore’ them as they search for the occasional Water Pipit (or hope for a long-shot Buff-bellied Pipit) during these limited opportunities.

Here is an extract from the Christchurch Harbour Ornithological Group website:  "The location of winter pipits within the recording area can be used as an indicator as to the likely species or race. Rock Pipit seen on the Hengistbury shoreline or Stanpit river bank are almost exclusively Western European petrosus birds, some of which are thought to be resident and form the Hengistbury breeding population.  However, Rock Pipit encountered on the saline marshes of Stanpit are candidates for littoralis race.  Of course, many are simply indistinguishable from petrosus , but there are often individuals that stand out from the crowd".  See also: http://www.manchesterbirding.com/logicalityoflittoralisiddocmanchesterbirding.com.pdf
for a closer look at the problem of field identification

In north Germany, for example, there are no breeding (or wintering) petrosus Rock Pipit and the species is exclusively of the form littoralis and a denizen of the muddy outer saltmarsh creeks.  Here it feeds on e.g. hydrobia which is, of course, an abundant food source in our own outer saltmarsh creeks and utilised by e.g. Redshank and Shelduck (ref:   Dierschke and  Bairlein: Habitat selection of wintering passerines in saltmarshes)

Here in Lancashire/Morecambe Bay, with one small exception,  we do not have resident  'rocky coast pipits' breeding nearby.  Apart from an isolated pair in at least 2015 on Chapel  Island in the Leven Estuary, the nearest breeding birds are St Bees in Cumbria and North Wales.  The migration Atlas, utilising ringing data, also deems petrosus as 'mainly sedentary', whilst conversely the Scandinavian form is known to be migratory.  However, we do receive the occasional 'dark smudgy-breasted individuals with 'no' supercilium' at rocky sites such as Heysham Harbour with two cases of late spring birds holding temporary territory around Heysham Head/Harbour, including "a few"  observations of parachute flight.   It is presumed that these might be wandering petrosus, but we have no ringing evidence, just a combination of habitat and temporary territorial behaviour

However, by far and away the preferred habitat for Rock Pipit in Lancashire is exactly that of known littoralis in Germany; outer saltmarsh creeks.    We have already had confirmation of this with two previous sightings of Scandinavian birds - one fully documented, the other not narrowed down to an individual.  Now we have a third, but unlike the two previous ones, this was well-photographed. 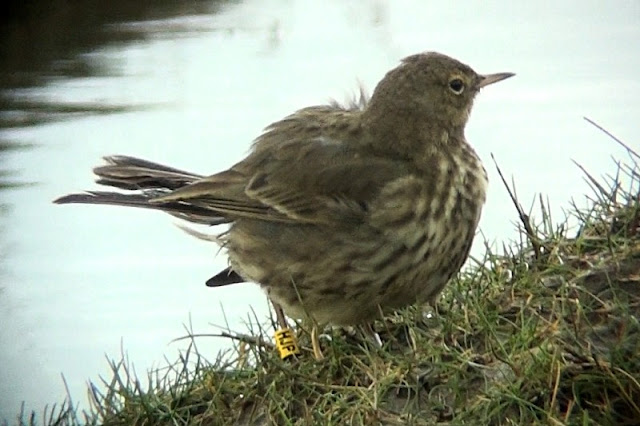 As can be seen from the photograph of this latest colour-ringed bird, there is little or nothing to suggest that it is any different from our resident petrosus, but, in Lancashire, as in many other coastal counties, it is surely time to assume all the saltmarsh Rock Pipits are littoralis by virtue of clear-cut habitat preference (beware the occasional Water Pipit).  This should be reflected in county and regional bird reports and indeed, in a county such as Lancashire, maybe the ones deserving individual documentation are the occasional rocky habitat individuals suggesting dispersing petrosus!    Caution is obviously needed with birds on passage e.g. small numbers of presumed littoralis pass through Heysham on especially autumn passage and documentation of littoralis should be limited to winter residents flushed out during saltmarsh inundation

Thanks to Chris Batty (photo supplier) and Andrew Cornall for persevering with this bird, leading to documentation and the Lancaster RSPB group for first drawing attention to it

A Record Year for Goldcrest

Just been looking at the Groups ringing totals for the year. Goldcrest at 531 new birds  had the best year ever. The graph below shows our ringing totals since 1992. Only in 2005 did we come any where near this years total.  Of the 531ringed 515 were ringed in late summer and autumn and probably reflects the large numbers that were reported on the east coast this last autumn. A recovery received today of one ringed at Gibraltar Point Lincolnshire on 11 October and caught at Middleton 21 days later certainly proves the link. Another recovery received  earlier was even quicker. It was ringed at Whitby on the Yorkshire coast on 12 October and recaptured at Leighton Moss 11 days later.
Amazing that these tiny birds  can  fly across the North Sea from Scandinavia  as two of our previous recoveries from Norway and Denmark prove.

Posted by North Lancs Ringing Group at 19:40 No comments:

The poor often wet and windy weather and high water levels has rather restricted our ringing mainly to garden feeding stations. We have made 11 visits this autumn and winter to Jerry's and Barbara's woodland edge garden. The highlights have been the catching of 19 Great Spotted Woodpeckers compared with only 8 in 8 visits last winter and 17 Nuthatch compared to just 5 last year.

We are colour ringing the Nuthatch and Jerry & Barbara have recorded 453 sightings to the end of January. These reveal that 12 birds are visiting the well stocked feeders regularly, very often in pairs and  it is rare to see  more than two birds at any time in the garden. It will be interesting to see what happens in spring-one pair bred in the garden last year

Blue tits continue to be present in lower numbers than last year, but Coal Tits are well up  with 95 this year compared to 47 last winter. Great Tits are very similar to last year and Chaffinch have gone up from just 5 to 33 this year. Rarities include  a Reed bunting and two House Sparrows!

Recent recoveries have  included a Barn Owl found dying in poor condition and very thin- no doubt a casualty of the poor weather. There has been many reports locally of Barn Owls hunting in the daylight, a sure sign that they are having problems finding food. Another was  a Pied Wagtail recaptured in  Devon; only our third recovery on the south coast of this partial migrant. In times past we have had three from France, two in Portugal and one each in Spain and Morrocco.
John
Posted by North Lancs Ringing Group at 16:45 No comments: