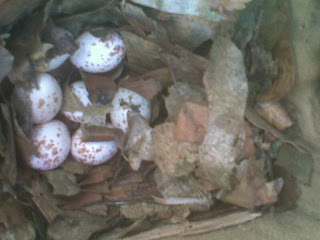 100 boxes checked yesterday and 32 definite nesting attempts (in addition to the 20-odd in my other wood), including this Nuthatch and one Redstart in the same box as for two previous years. Seven Pied Flycatcher clutches so far with other possible nests on the go. As Pete suggests, there may be many more birds coming ... it is still April (just!) and yes, Redstart are very inconspicuous when at the egg stage.

paul
Posted by North Lancs Ringing Group at 09:28 No comments:

Big difference between the upper and lower valleys. Haw Wood revealed 11/11 boxes occupied with 9 of these being tits, including a full clutches of 12 + 9 being incubated with the rest containing 3, 4, 7, 8, 8, with 2 incomplete nests. Pied Flys comprised one completed nest and one just started

At the other end of the valley, a set of newly-erected boxes alongside Mill Stream by the northern fringe of Thrushgill clearfell comprised: one presumed inexperienced tit spp with 3 eggs in a barely completed nest, another tit with just one egg, a very rapidly completed Pied Flycatcher nest with noisy male in attendance, two nests presumed to be completed Redstart and another 3 containing bits and bobs of material, hardly deserving the term "nest", which suggested Redstart or Pied Fly. Are Redstarts always elusive during pre/early egg-laying stage - no birds anywhere near the completed nests? 6 boxes were completely empty

Not sure about the ones in between the lower and upper extremes as I am not involved in the monitoring, but at least 5 Pied Fly nests reportedly involved

By no means certain all the females are in yet for either Pied Fly or Redstart as, despite an early mass arrival e.g. 9th-10th April, the recent weather has really blocked stuff - e.g. Swallow numbers are still very low.
Posted by North Lancs Ringing Group at 22:24 1 comment:

A week later, a different wood ... still no Pied Flycatcher clutches (though a couple of nests look ready for eggs) but over 20 Tit clutches (out of about 75 boxes!) One clutch unusually lined completely with badger hair - must be a baldish one out there somewhere!

Looks like it'll be a bumper (and expensive) year for the committed pulli ringers out there. Maybe I should join the Half-way Harries and not ring tit pulli?

paul
Posted by North Lancs Ringing Group at 16:10 No comments:

The first of the season's visits to the Roeburndale Woods yesterday. 100 boxes checked and lots of signs of early activity but only one clutch started so far - and that was a tit rather than a flycatcher so there is no need to panic if you have boxes to put up but haven't started yet, but a sign of how quickly birds take to new boxes was shown by many birds building in boxes that were put up six days previously - and that in an area where there are already plenty of boxes. If you would like to join me when I check my boxes, please let me know (see address at the side) - it will usually take 2-4 hours and entail a bit of a scramble in places, usually in the evening or at weekends Paul
Posted by North Lancs Ringing Group at 10:52 No comments: 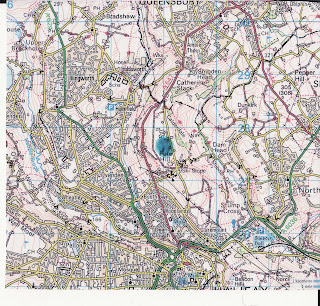 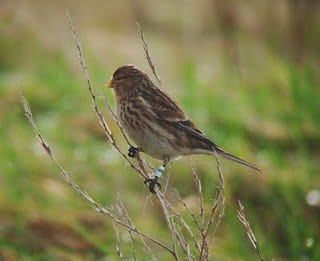 Always a thrill to see your first adult bird of the spring carrying food to its nest especially when its a species which you study intensively. This morning I saw a pair of Bearded Tits with beaks full of insects going into one of my reed wigwam nest boxes. I managed to get the colour ring combinations of both birds, then armed with my disturbance licence visited the nest box briefly to find six young ca 5 days old. Back home I searched my data base for details of these two birds.
They were ringed together on 6th August 2009 ca 150 metres from where they are nesting. Both were in juvenile plumage. Later in 2009 they were seen or re trapped together on three occasions. During 2010 they were recorded together on no less than 16 occasions mainly visiting the grit trays and today they were still together rearing a brood.
Bearded Tits are well known for forming pairs while still in juvenile plumage but this sighting along with several similar ones over the years show that these early liaisons can form lasting bonds. I had one pair that bred together and remained together throughout the seasons for three consecutive years.

A small ringing session at Wray yesterday produced two Chiffchaff and two male Pied Flycatchers, including one ringed as a pulli in the valley two years ago. Few Tits at the feeding station as most seem to have dispersed into breeding territories.

It will soon be time to start checking nestboxes!

So far in 2011 NLRG has caught 24 controls. (a control is generally a ringed bird that has moved more than 5km). This is unusually high for so early the in year. These 24 are made up of:

I've excluded Wader and Gull sight records as they are largely down to effort rather than a true reflection of how many ringed birds are about.

If we excluded the small finches (Goldfinch, Siskin and Redpoll) we would be at about normal levels. Judging by other ringing group blogs I'm fairly certain we're not the only group catching many more control finches than normal this winter. I look forward to hearing about where all these birds are from.

Richard
Posted by Richard du Feu at 21:04 No comments: 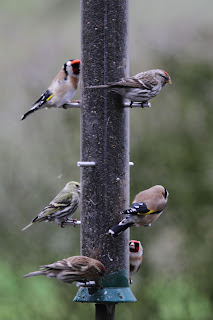 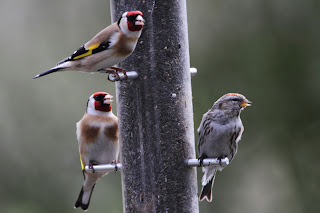 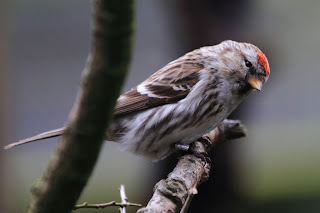