North Lancs Ringing Group have published their annual report for 2016.

Many thanks to all contributors to the report.
Update - The link is not all that clear in some browsers; if it isn't visible click here.
Posted by Richard du Feu at 20:06 No comments:

Just returned from a visit to one of my nest box schemes in the Lune valley. Over the past 10 years the number of nesting Pied Flycatchers has increased from one to a high of six pairs in 2016. Today of the 39 nest boxes only four were unoccupied.Of the occupied ones 33 were tits, mainly Blue Tits most of them at the laying stage only two were incubating and two Pied Flycatchers both with only males in attendance.Tit numbers appear to have increased dramatically from just 26 last year to 33 this year and the highest occupation rate to date. It looks as though the tits have survived well over the past mild winter. The high tit occupation rate means there are only 4 empty nest boxes for the later arriving migrant Pied Flycatchers unless they take over the two tit nests which were not yet fully built. Seriously wondering if we should take some more boxes on our next visit. Will check my other Pied Flycatcher wood next week where we have had a peak of 15 in recent years, but there has been plenty of empty nest boxes.
John 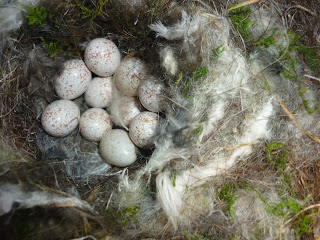 Posted by North Lancs Ringing Group at 17:19 No comments:

Three of the 40 avocets on the Allen Pool at Leighton Moss and Morecambe Bay RSPB Reserve are colour ringed. One ringed in Brittany as a chick in 2008 has been breeding there since 2012. This year two more appeared and we have just discovered that they were both ringed as chicks on the same day (24/5/15) at the same site at Seal Sands Teesmouth although not from the same brood. After leaving Teesmouth one was seen in Lincolnshire and the other in the East Riding both in mid July. But there has been no further sightings until now. Both now appear to have mates and are nesting on the same island. This is almost certainly their first breeding attempt as many waders do not breed until their second year. It also shows ,along with the French born bird the dispersal of this species.
John
Posted by North Lancs Ringing Group at 20:01 No comments: 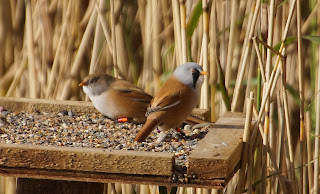 Posted by North Lancs Ringing Group at 16:59 No comments: