The latest sightings of colour ringed Bearded Tits breeding in our wigwam reed nest boxes at Leighton Moss again shows how pairs remain together through the winter and to the next season if of course they both survive.

The female is in her fifth year and the male in his fourth. They  were not traced in the breeding season until  May 2013 when they bred together in one of our nest boxes. Bearded Tits are difficult birds to keep track of  because of the  dense reed habitat they occupy but the grit trays in autumn are a good focal point . During October 2013 this pair was 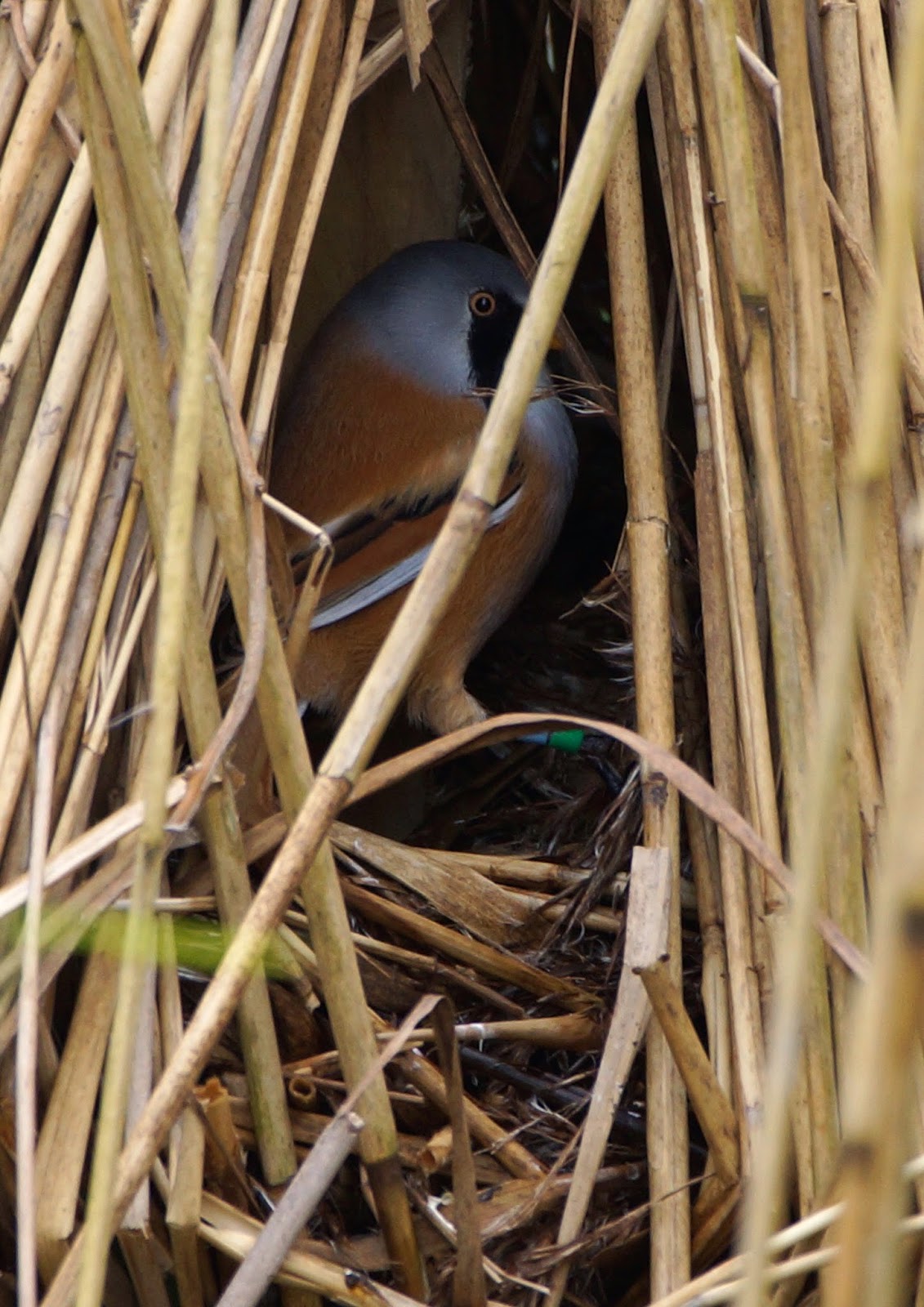 seen together on the grit trays on seven occasions acting as a pair  and this spring they are nesting together in a nest box ca 120metres from their last year nesting site.
John
Posted by North Lancs Ringing Group at 20:25 No comments:

Luckily there are no photos in today's report!  Since Saturday a total of 15 sightings of Godwit have been made at Leighton Moss of 12 individuals with a peak count of 2,100.  600 birds have also been seen at Condor which included at least two colour ringed birds.  These are certainly different individuals to those present at Leighton Moss.  I'll update the blog in a few days with a summary of the birds seen locally.

On Saturday I predicted today was the day to see birds migrating.  When I arrived at the Allen Pools this evening it was clear the Redshank were more excited than yesterday and the numbers of Godwit had dropped significantly.  The noise from the 1,000 Redshank was incredible with constant calling and all the groups were jumpy.  This is part was due to disturbance however a lot was due to them being ready to head North to breed.

When I arrived there were only about 100 Godwit on the pools.  At around 19:30 a group of 40 took off noisily and circled over the pools before heading North, briefly returning over the pools before heading North West at height with great determination.  Soon afterwards another group of about 40 did the same leaving about 25 Godwit on the pools. I thought all that was left for the evening was for the Redshank to do the same however they showed little interest in moving out.  At around 19:50 a flock of about 400 Godwit flew up from the Heysham area gaining height as they flew North.  Roughly over Arnside they circled and gained more height before flying North East.  They soon reappeared and like previous flocks circled over the pools before heading North East once again gaining height and disappeared into a fantastic sunset.

This evening is one of the most memorable migration sights I have had in the UK.  Autumn mornings on the East coast can be spectacular with huge numbers of birds coming off the sea however this is nothing compared to seeing birds departing en masse with the huge amounts of chatter between individuals in a flock.

It was a bit too windy to do any ringing this morning so I spent the morning trying to read some Black-tailed Godwit colour rings on the Allen Pools at Leighton Moss.  Initially success was limited to the French ringed breeding Avocet now in its 3rd season at Leighton Moss.  This bird was ringed as a chick in the gulf of Morbihan, France during 2008. It was then seen frequently until 2010 close to its natal area before appearing in 2012 at Leighton Moss and has been present every season since. 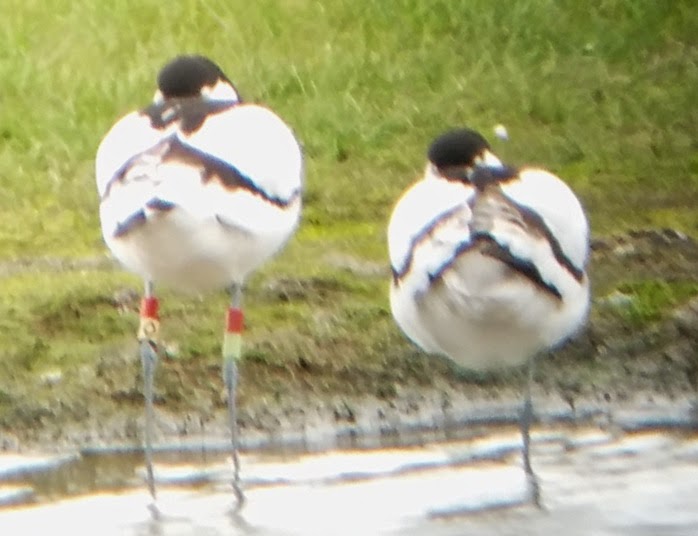 After another hour of looking through the hundreds of summer plumaged Godwit I finally found some White Wagtails, Ruff, summer plumaged Spotted Redshank, Dunlin, Knot and Turnstone yet still no colour rings. I decided that Leighton Moss must be the place where unmarked birds go while on migration so was about to give up.  Luckily something disturbed the Godwit from roosting in deep water and I found the first colour ringed Godwit of the day: 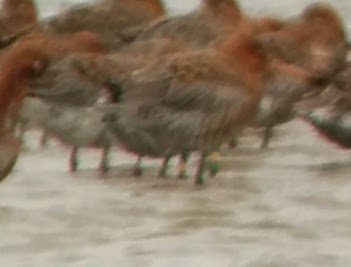 With a bit of imagination you can see the Green/Green/Yellow on the left leg and Green/Yellow/Green on the right, also known as GGY-GYG.  This shows the bird was ringed in Suffolk.  I'm awaiting details for this bird however it is the first time we're aware of it being in the area.

With renewed enthusiasm I rescanned the flock and quickly found two more colour marked birds, YN-RX (Yellow/Black, Red/WhiteX) and YN-LO (Yellow/Black, Lime/Orange).  The first of these is a regular at Leighton Moss, having been ringed in Iceland in 2009.  It is often present in October and late March to early April spending the rest of the winter on the Dee.  Sadly (or maybe, judging by the other photos, luckily) things were happening too quickly to take a photo!  YN-LO was also ringed in Iceland although details are still to come.

I once again was planning to give up when another bird woke up and started preening.  The rapid leg movement while standing in deep water made reading the combination just a little difficult however after quite a few minutes of waiting OR-WW (Orange/Red, White/White) finally became readable.  For me this is a nice record because it was ringed on the Wash where I have ringed many birds although I was catching birds on a different field on the Wash when this one was ringed in August 2010. This bird has had few sightings since ringing which are all in East Anglia except a passage record in Scotland in April 2013.

Just as I had decided it was too cold and really time to give up I managed to see another colour ringed bird.  Sadly for readers I took a photo: 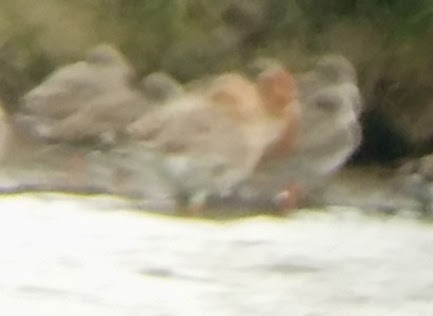 All I can say is this is the bird that got away!

As always thanks to all the ringers who provided the details of the birds (Guillaume Gelinaud, Jenny Gill, Pete Potts and Vigfus Eyjolfsson).  Sightings of colour marked birds are always really valuable particularly at this time of year when there is rapid turnover of birds using sites to feed up before heading to Iceland to breed.  My guess is that most of these will clear out on Tuesday evening when a gentle southerly wind is forecast.  It may be an excellent evening to be at the Allen Pools to watch large numbers of Godwits depart for Iceland in the early evening.
Posted by Richard du Feu at 22:03 No comments: 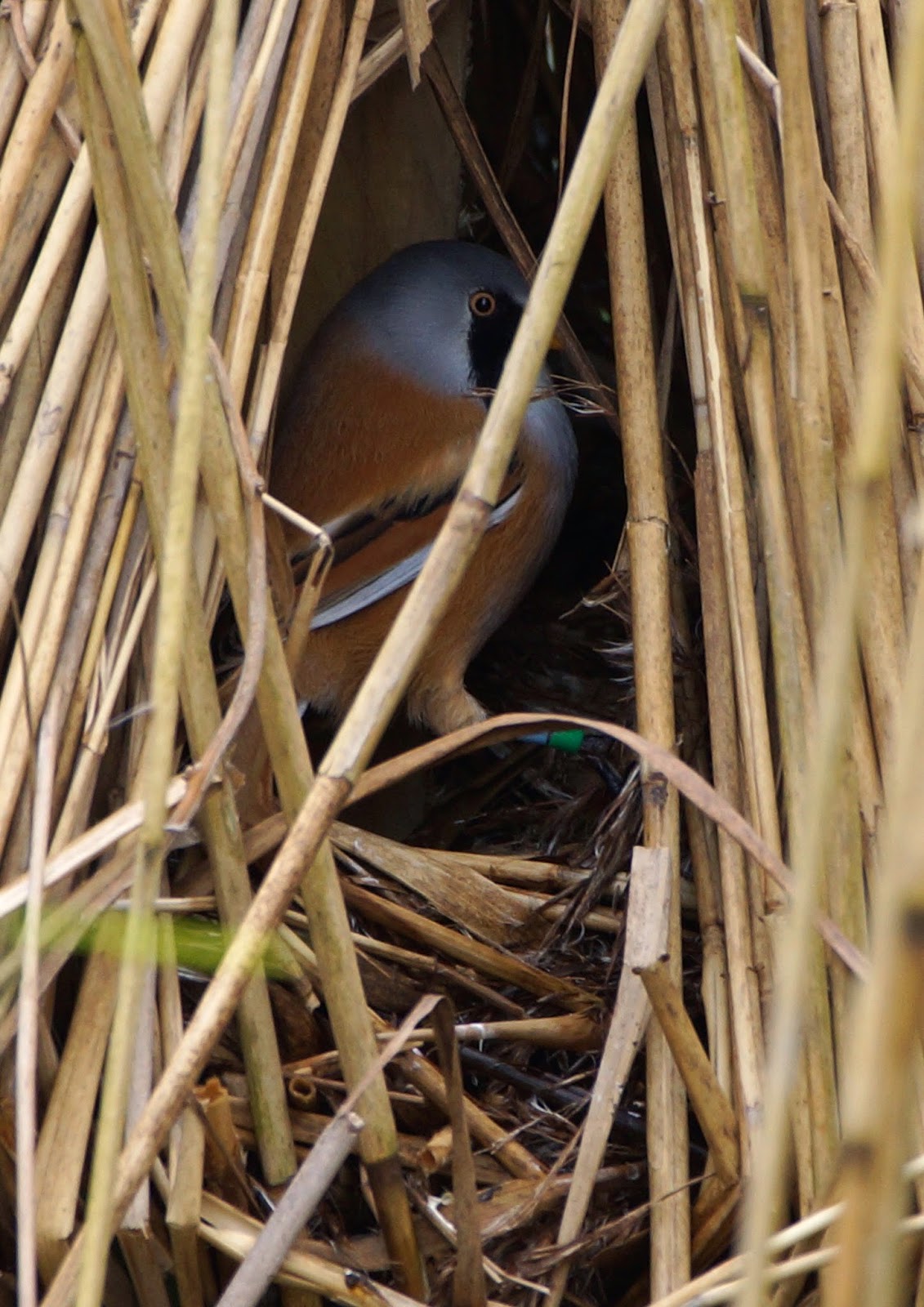 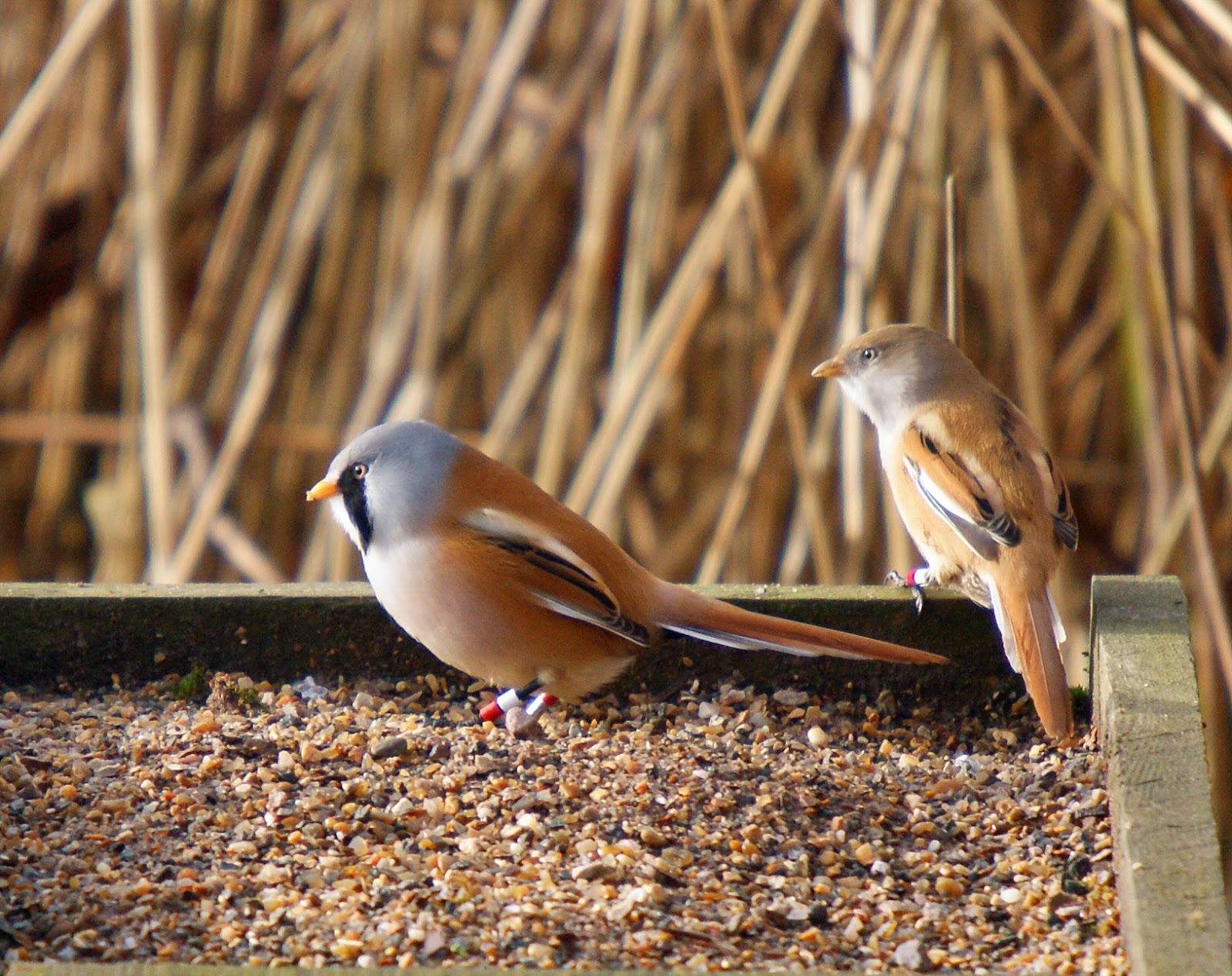 Posted by North Lancs Ringing Group at 17:31 No comments:

Another Batch of Recoveries

A recent batch of recoveries include many  that back up past findings but a few that break new ground.

Two more Sand Martins caught on autumn migration in France, brings our total to 47. Both were adults we controlled at colonies on the River Lune and both had been ringed at the same site in Charente-Maritime in France in August 2012.

A Reed Warbler in  France in August brings our total from there to 19 with 12 of them in August. Much more unusual was one in  Ceuta  the Spanish enclave in North Africa on April 1st, bringinmg our total African Reed Warblers to 5 the other four were in Morrocco

Our colour ringed study of autumn migrant Grey wagtails centred on Heysham has produced some interesting results. Sightings from previous years have been from Merseyside (2) Staffordshire and Wiltshire. A sighting at Skokholm (Pembrokeshire) on October 14th just 10 days after ringing at Heysham and 304 km SSW is the longest movement we have recorded. Uniquely this winter has produced  3 sightings in our local area suggesting that this unusually mild winter has inhibited movement.

A wintering Siskin was caught in the breeding season 508 km N at Bettyhill (Highland) making 16 birds from this area from our winter and spring ringing.

Finally a Brambling made an interesting change of wintering location it was ringed on Feb 8 2013 at West Tofts (Norfolk) and photographed by Margaret Breaks in her garden at Newton Bowland on  March 2nd 2014.

John
Posted by North Lancs Ringing Group at 17:54 No comments: