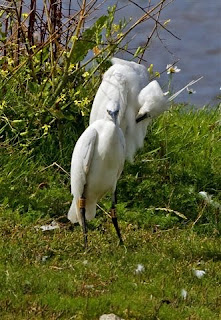 John
Posted by North Lancs Ringing Group at 19:13 No comments:

It has been an excellent year to date for numbers of Willow Warblers ringed. The Group as a whole has ringed almost double last years total and there is still some time to go yet. That they are getting ready to depart was shown by this mornings capture of 31 birds of these 6 had started to accumulate fat. The heaviest was one at 9.8 with a fat score of 3.

By Contrast Reed Warbler and Sedge Warblers after a very successful first brood during the dry weather earlier in the season appear now to have had a very poor second or late broods with unusually low numbers being ringed over the past two weeks. One can only assume that this is due to the very wet July when we had 180% of normal rainfall.

Juvenile Reed Warblers are also showing signs of getting ready to migrate, one caught this morning had a fat score of 4 and a weight of 14.7 almost 3 grams above normal fat free weight.

Although we are talking about much smaller numbers ringed,it does appear that Grasshopper Warblers have also had a successful season

Bearded Tits are doing well this year, to date we have caught 27 adult males the same as in 2009 and 10 adult females compared with 18 in 2009. We continue the study into November so there is still plenty of time to catch or sight more. To date we have ringed 69 young birds compared with 103 last year. Birds start to use the grit trays in early September and we usually get up to 300 sightings of our colour ringed birds between then and December.

Reed Warblers also appear to be having a successful season To date we have caught 217 adult birds which is the third highest in the 14 years of the study- and there is some time to go yet-although some adults are showing signs of leaving with several birds having fat scores of up to three during the last week of July.

Of the 217 adults 115 are new birds 97 had been ringed in previous years and two are controls.

Of the 97 ringed birds one is eight years old, one seven, two six, five five, four four years 20 three and the rest one or two years old.

To date we have ringed 253 young reed warblers but have been rather frustrated by the weather in recent days.

John
Posted by North Lancs Ringing Group at 15:49 No comments: