Its been a difficult season so far for our nest boxes. A few Great and Blue Tits started at the usual time, but most are 10-15 days late no doubt due to the cold April . Clutch and brood size have been low in the tits and Nuthatch and there has been several cases of the all brood  being found dead.

It has varied somewhat from site to site , difficult to know why this should be be . At one site close to a well stocked feeding station,  survival and brood size has been good. But at another,  also close to feeding stations it is the worst season in over twenty years. Besides the difficult weather this later wood is suffering badly from Ash die-back.

By contrast Pied Flycatchers in most of our woods are doing well. They are about 10-15 days later than usual but clutch size has been normal. Too early yet to report on brood size as on the last visit two days ago around 50% had yet to hatch. One wood has suffered from heavy predation, thought to be weasel or Stoat.

Recoveries recently have been rather sparse but some interesting ones. A  Blackcap ringed on 26th November at a feeding station was found dead 36 days later 290 km south in Somerset. So they move around in winter.

Siskins are uncommon breeders in our area and a juvenile caught at a feeding station on July 19th was thought probably to have been  a locally bred bird. However it  was caught 330 kms north in Aberdeenshire, soo  obviously a Scottish breeder. It is our 37th Siskin from NE Scotland.

A Lesser Redpoll ringed on 20th April was found in the Western Isles 452 km  north in 20  days.

This is a busy time of year with ringing starting on our Sand Matin RAS on the River Lune.Last year we had 120 nests of Pied Flycatcher in the Lune valley. So hopefully we will have plenty of  nestlings and  adults  to ring this year in our  RAS.

Posted by North Lancs Ringing Group at 19:47 No comments:

It's a while since I posted anything about Knot. The project keeps going with sightings coming in thick and fast from the North West and recently Orkney, Shetland and Iceland. We have been very successful at colour marking moulters and winterers on the Sefton coast however the group we have targeted and failed are the 2nd year birds which historically congregate on the Sefton coast throughout summer. This changed last week when we added colour rings to around 250 2nd year birds and recaught three that were ringed last autumn in Ceredigion.

One day I hope we will have answered some of the following questions about these second year knot:

I think it's safe to say very few or no canutus were in the catch from the biometrics so recoveries of these birds in Africa is pretty unlikely.

Perhaps the biggest surprise for me was the proportion of adults we caught (about 10%). Those going to breed should have gone in early to mid May so these are, without a doubt, birds that are not going to breed this year. The weights of birds were too low to make it to the arctic and only around 15g heavier than the immature birds. 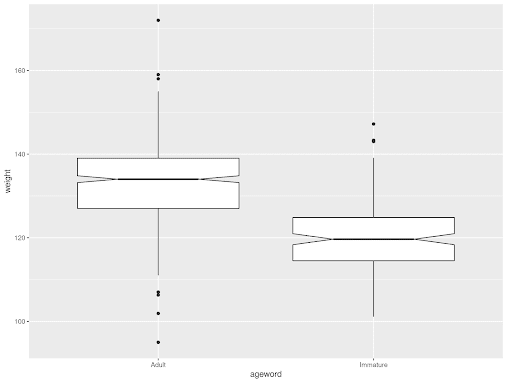 If these were birds in poor condition as a result of issues in since their last moult it would be likely their wing and bill measurements would reflect those of the adult wintering population. When I plotted wings against bills of adults we caught last week and those we caught in March 2018 it's clear there is a significant difference. The May birds were short winged and short billed. This suggests they're more likely to be males. 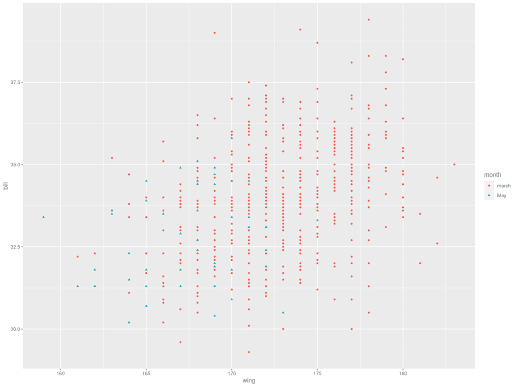 I can see a few possible reasons for this although none really provide a complete answer:

I've no doubt I've missed a few possibilities, suggestions as to what could be going on are welcome.
This made me think about whether the adults and juveniles are of a similar size, anyway, what's interesting is these small adults have marginally bigger bills than the immature birds. I would expect that the full bill length should have been reached by now. Wing lengths are not comparable because the immature birds are still flying on their first set of flight feathers. 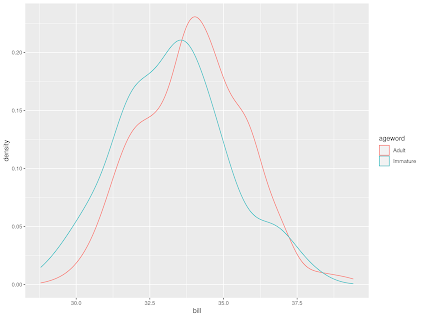 In summary there are no answers, just questions. With just 3 already ringed birds caught these cannot really help answer any questions other than showing that juvenile Knot that used Ceredigion in September 2020 have moved to the Sefton coastline for the summer.

A huge thanks to everyone involved, particularly Sefton Council for access, all the observers for the huge numbers of colour ring sightings and everyone involved in processing and flagging the Knot.
Posted by Richard du Feu at 17:16 No comments: