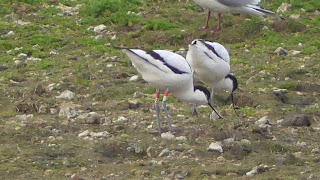 Two recent Goldcrest recoveries show how much they are moving around in winter. Both were ringed in our area in early October when there was a marked movement of Goldcrests and both were retrapped in mid December. The first went 137 km east into Yorkshire,while the other went 330 km. SSE to Greater London.

The Group has 37 Goldcrest recoveries and the one showing movement east into Yorkshire at this time of year is a first. The other is more usual for we have eight recoveries showing movement to south east England or along the south coast. the fastest was one ringed on October 1st and caught 12 days later 354 km. south in Hampshire.

The recoveries show that these birds could be continental breeders for we have reports of autumn ringed birds in Norway and Denmark but we also have two caught in the breeding season in North Scotland.
John
Posted by North Lancs Ringing Group at 19:59 No comments: