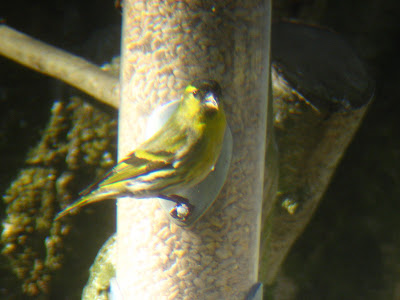 GARDEN SISKIN
There has been lots of reports of Siskins coming to feeders this spring and late winter. Several people have asked where these visitors breed. We have ringed just over 900 in the area almost exclusively in gardens and 33 of these reported from elsewhere. Of these 14 were reported from Scotland during the spring and summer suggesting that this is the main area where these birds of coniferous forests are coming from. A few are drawn from further afield with one, (killed by a cat) in southern Sweden in late April . We also have 3 reports from Belgium- one each in March September and November so these may be either Scandinavian or Scottish birds moving through Belguim at this time. The same is probably true of a bird in France on April 1st.

Having said all this there are increasing numbers being reported during the breeding season in the maturing conifer woodland in our area and in Cumbria so some at least of our birds may be quite local. If you come across any Siskins in typical habitat please report these for the BTO Atlas.

where do your garden's birds come from?

A Greenfinch that was caught in my garden in Hala, Lancaster on 9th November 2008 had been ringed at Spurn Point, Humberside nineteen days earlier.

Spurn Point is a well known staging post for birds migrating across the North Sea from Scandanavia and it is tempting to think that this bird might be one of the small proportion of wintering Greenfinch that come from Norway. To put it in perspective, over 1.5 million Greenfinch have been ringed in Britain but only 141 have made it here from other countries - so its a small, but tantalising, possibility that this is the case.

However, unless it goes back to Norway and is caught there this year (or later) there is no way of knowing for sure. Who knows? The birds in your garden might also be visitors from outside the area!