I have already reported that it has been a disappointing season for Reed Warblers at Leighton Moss RSPB Reserve, this I am sure is due to the poor weather throughout much of the season. This has rather restricted our activities and number of ringing sessions is down to 46 compared to an average of 61 over the past five years. Numbers of adult birds caught were only slightly down  at 140 compared to an average of 156. Of these 56 were re-traps from previous years. Our oldest bird was 7 years and 295 days from first ringing as a juvenile. Surprisingly it had not been re-trapped  until this year. We had 2 other birds in their 6th year.

Productivity was well down with only 263 juveniles ringed compared to 976 in 2014 and a five year average of 687. One can only assume that the cool, wet and windy weather during the bulk of the breeding season has taken its toll.

Our main study is Bearded Tits and these are also well down with only 31 juveniles ringed this year compared to 69 last year. To date we have sighted or re-trapped 16 adult males and 17 adult females compared to 21 males and 20 females last year. But there may be more to come as we get more grit tray sightings. The first high flying  behavior was seen yesterday- just a short flight then back into the reeds. Last Saturday we caught 24 Bearded Tits but only 1 was un-ringed. Recent ringing has produced good numbers of Lesser Redpoll, Goldcrests and Chiffchaff.

Posted by North Lancs Ringing Group at 19:37 No comments: 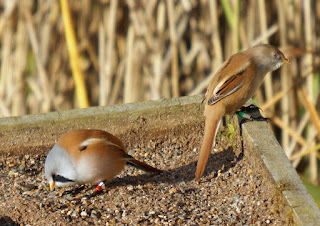 Despite reasonable ringing weather our catches at Leighton Moss are down for most species.In our main study Bearded Tits, the catch of juveniles stands at 28 compared to 63 by the same time last year. But Blue Tits are reaching an all-time low with just 12 caught in the first half of September compared to 118 in the excellent productivity year of 2014. A visit to our woodland feeding station where Blue tits are usually the commonest species, we only caught 3 and both Great tit and Coal Tit exceeded them. Coal tits appear to have done well for at Leighton Moss we have ringed 18 in the first half of September compared to just 6 last year. Another mainly conifer breeding species Goldcrest is also doing well with 53 this September compared to 55 last year.

On a brighter note a visit to Jerry's Woodland edge garden produced a record catch of 9 Nuthatch. Kevin Briggs is starting a project on this species so we colour ringed all 9. Jerry has been recording the birds visiting his well stocked feeders and beside the 9 colour ringed birds he has seen a ringed only bird and two unringed together making a total of at least 12 visiting his feeders.

As we approach the end of the warbler season its time to take stock of the ringing totals for this year in our study at Leighton Moss RSPB Reserve.

Of resident birds, Blue Tits are well down with only 106 juveniles compared to 376 in 2014 and a five year average of 269. Todays catch of 43 birds included only 1 Blue Tit this compares with an average catch  of 15 birds in early September last year.  Goldcrests though are doing better we caught 12 today to bring this year total to date to 42 compared with 52 for the whole year over the past  five years.

Our main study is Bearded Tits  which go very quiet as they moult in August .  Today we caught 2 bringing our total young to date to 27 again well down on previous years.