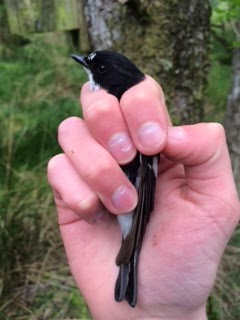 Posted by North Lancs Ringing Group at 14:35 No comments:

July was a disappointing month  especially for Reed Warblers and Blue Tits August has continued in the same vain.  Reed Warbles  are having a very poor season at Leighton Moss RSPB Reserve. By this time last year we had ringed 635 juveniles,  this  year just 165 despite similar effort. Sedge Warblers are mainly passage birds here and a similar comparison  shows a  small increase,  87 in 2014 and 103 juveniles this year. Willow Warblers  have also done better with 193 last year and 201 this  year.

Blue Tits are down  from 132 in 2014 to 98 this year. Over the past five years in summer we have averaged 11% of adult Blue Tits in our catch. This year it has risen  to 30.5% suggesting very poor productivity which reflects what we found in our nest boxes.

To date we have only caught 3 adult Reed Warblers in August. they seem to have made an early  move out. A conclusion backed up by one adult that we caught on the 15th . It weighed in at 14.4 grams compared to the usual 10-11 grams. It had a fat score of 5 and was obviously preparing to leave.

Today we moved away from the reed bed to Jerry's well stocked woodland edge garden and caught 100 birds including 8 Great Spotted Woodpeckers. In past visits Blue Tits have been the commonest bird but today  Great Tits surpassed them .Of the 20 Blue Tits caught 13 were adults confirming the poor productivity this year.

John
Posted by North Lancs Ringing Group at 19:29 No comments: