Nest Boxes have a Successful Year

It's  been a successful and early  season for all the seven nest box schemes that I collect data for. Of the 213 nest boxes 124 (58%) were occupied by 54 Blue Tits, 46 Great Tits, 17 Pied Flycatchers 3  Nuthatch,  and 2 each of Marsh Tits and Coal Tits. Compared with 2013 Blue Tits are up by 8, Great Tits down by 8 and Pied Flycatchers up by one. Distribution though was interesting. Comparing the numbers of Great Tits to Blue Tits, in the mainly Ash dominated woodlands in the low lying Silverdale area 60% were Great Tits but in the higher Oak Woodlands of the Lune valley 84% were occupied by Blue Tits. The figure in the Lower Oak woods was 66% for Blue Tits 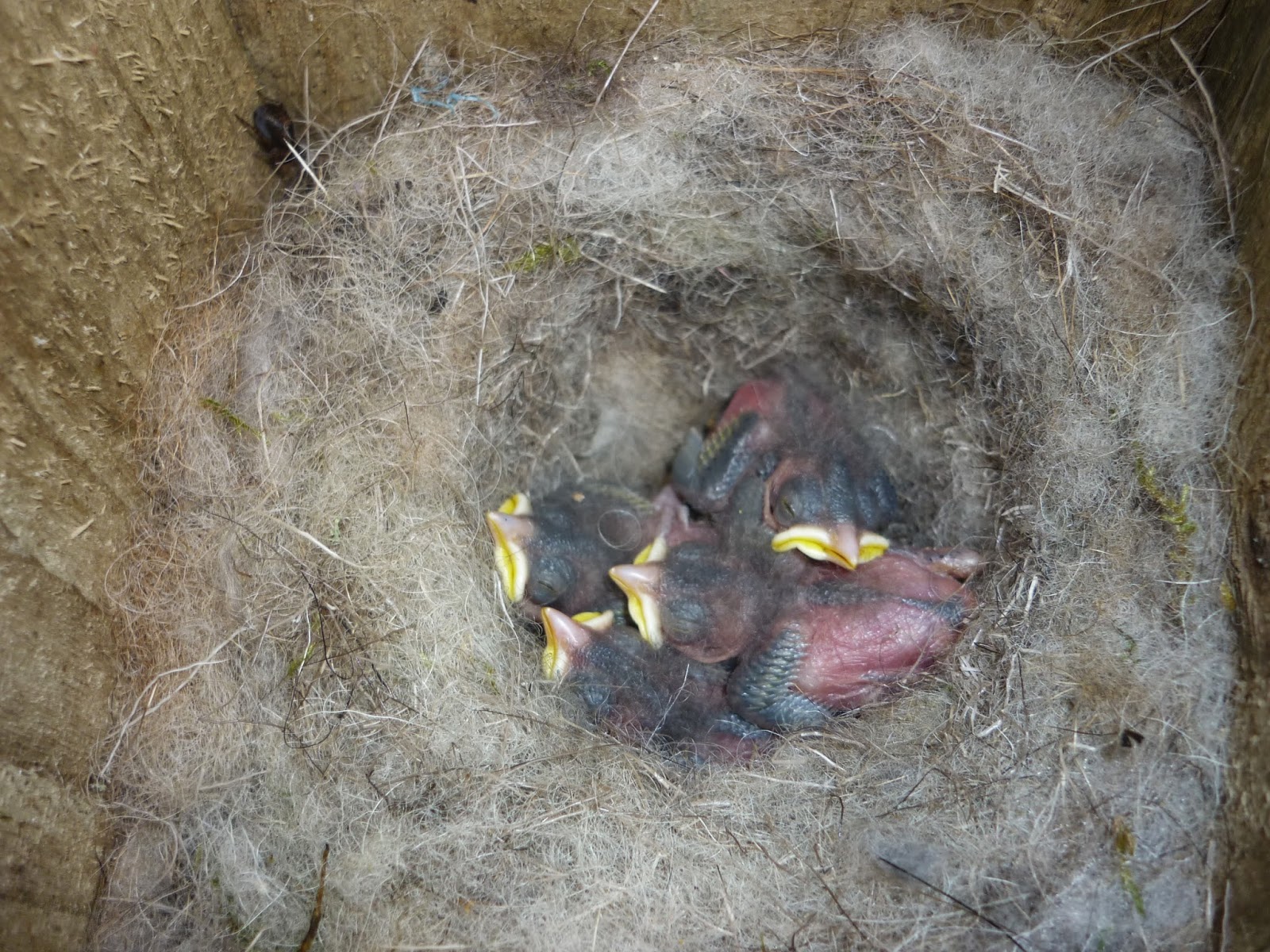 Pied Flycatchers appear to be moving away from the lower oak woodlands. This year they have declined from four pairs to just two. But  the upper woodlands have seen an increase of three pairs.

Success rate for all species was very high with 95 boxes (79%)producing young. Apart from losses of complete broods in one area which was almost certainly due to predation of the adults by Sparrowhawks. Survival after hatching has been high being 92% in Blue Tits and 98% in Great Tits. These high survival rates are no doubt due to the  large numbers of moth caterpillars reported this year and the favorable weather.

A Promising Start to Our Bearded Tit RAS

Our first three catches of the season at Leighton Moss RSPB resulted in the capture of 24 juvenile Bearded Tits. This compares with just 48 in the whole of the 2013 season and suggests excellent productivity. Young Bearded Tits can be aged by the colour of their iris  and almost all the ones we caught were from the first brood which fledged in late April/early May. Six of the 24 had been ringed as first brood nestlings. Shortly after fledging Bearded Tits form apparent pairs.  Almost all the birds we caught were in pairs, interestingly three of the nestlings were from the same brood but  they had  linked up with  birds from other broods. In previous years we have caught juveniles  throughout the summer and occasionally into early October, so all being well we should have many more yet to catch.

Census work on Bearded Tits is very difficult as they do not sing or behave territorially, so our RAS study gives a good guide to the size of the breeding population. From sightings of colour ringed birds and our re-trapping  we have so far identified 9  adult males and 8 females but we continue to trace more adults as the season goes on right up to grit tray sightings in October and November.

John
Posted by North Lancs Ringing Group at 17:34 No comments:

It is a good year for Pied Flys in our area this year with  reports of a marked increase over 2013 especially in the more upland woods. Productivity has been excellent with good brood size and so far only two  nests have failed.

Our re-trapping Adults for Survival study area comprises 13 woods in the upper Lune valley and its tributaries. Several returns are yet to come in and some late nests still have nestlings to ring but to date I have received details of 294birds. These break down to 29 new adults 215 nestlings and 50 re-traps or controls  of adult birds.

A quick analysis of the re-trap data shows some interesting  differences as one might expect between birds ringed as adults and those ringed as nestlings. Of the returning adults 16 were re-trapped in the same wood as previous years and only four moved to another wood. However one female moved 17km from its nesting  area last year.  Of birds ringed as nestlings and returning to breed for the first time 13 returned to the wood where they were born but 22 moved to another wood. This later figure may increase  when the Ringing Office forwards any controls outside our area.
John
Posted by North Lancs Ringing Group at 16:53 No comments:

Sand Martin to Spain... and back.

In September 2013 we had an email from the BTO to say one of our Sand Martins from the Lune had been caught in Spain just 39 days after we had ringed it as a juvenile near a colony on the Lune.  Last night this bird was back at the same colony as a breeding male.  This is at least the 3rd one of ours to be caught on migration or in wintering grounds before being retrapped on the Lune.  The previous two have been to Senegal and France.

As the Sand Martin ringing is part of the BTO's 'Retrapping Adults for Survival' we aim to retrap individuals between years.  Last night had a total of 13 recaptures out of 93 Sand Martins.  These comprised of:

We also had two British 'controls' and one French. Given the high rate of controls I should probably suggest changing the name of RAS to 'Controlling and Retrapping Adults for Survival' however the new coordinator may not like the acronym!

Although we need to collate all the data, the impression from our 17 nest box schemes is that it has been a very good season. In most cases numbers of occupied boxes is well up. Pied Flycatchers especially have had the highest numbers for several years especially in the higher altitude woods.  They have a good spread of arrivals with some pairs feeding  well grown young and others just starting incubation. Brood size is good the average  for the 20 broods ringed so far is  seven. Our RAS on this species is going well with good numbers of adults caught. 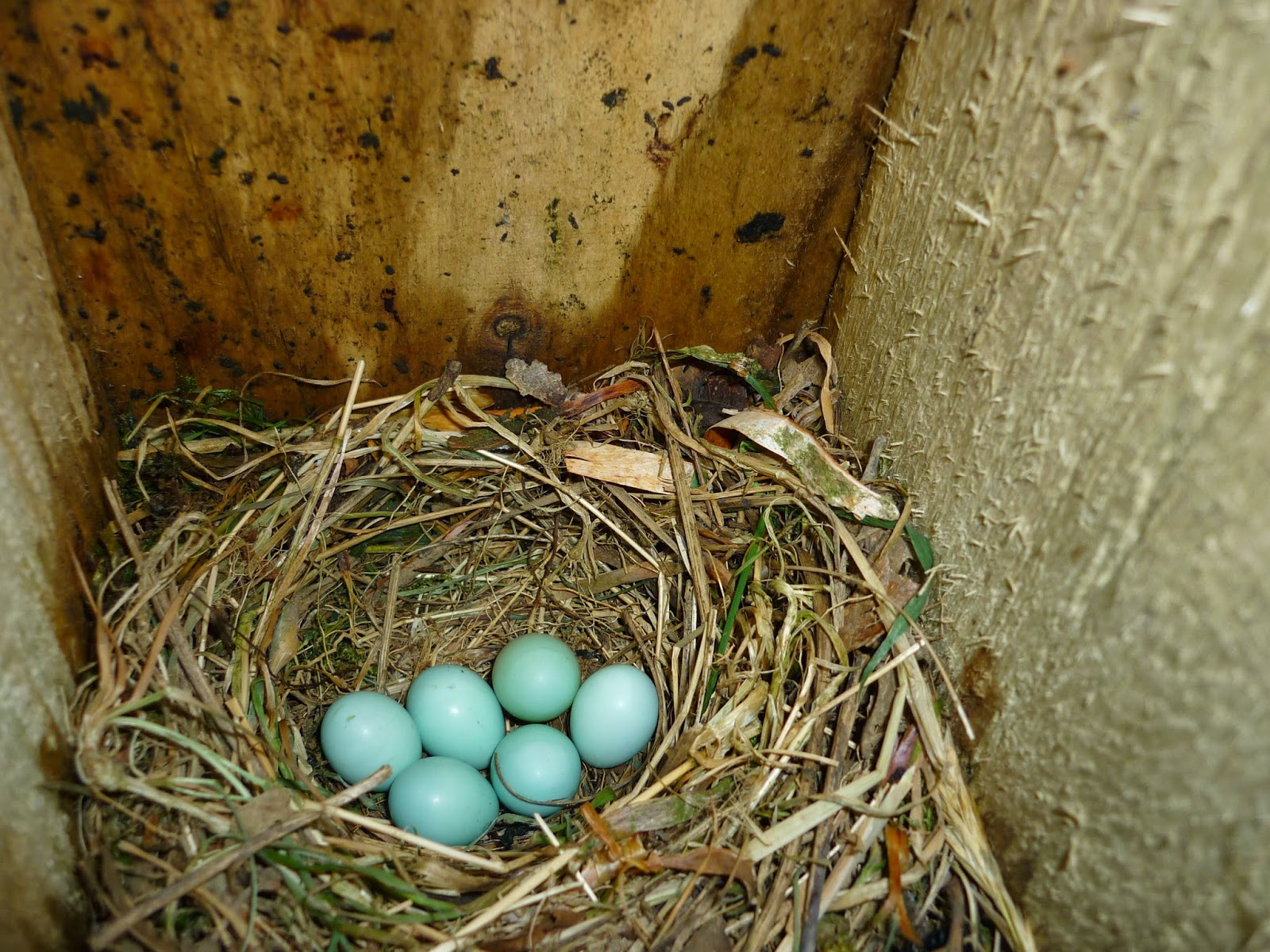 Pied Flycatcher Nest
Tit broods are also high  and except for a few total broods, which are probably due to  predation of the adults there has been no deaths of young. We also have more Redstarts using boxes this year, some using special boxes with a key hole style entrance

This all suggests that, food which is mainly caterpillars is  abundant, a suggestion supported by the numbers of caterpillars one finds attached to your clothes are you do the rounds of the boxes.
John
Posted by North Lancs Ringing Group at 17:11 No comments: