Worth checking the local tidelines in the next few days to see if the minor seabird wreck reached this part of the world. Could just be the odd interesting ringing recovery out there waiting to be found - says he sitting in a warm Heysham NR office with the rain lashing down!

Pete
Posted by North Lancs Ringing Group at 12:16 No comments:

Bearded Tits continue to use the grit trays at Leighton Moss despite the wind and rain. To date we have logged 275 sightings of 75 colour ringed birds. Thanks especially to Keith Kellet and Alan Gallagher and several other birders for colour ring sightings.

This year the birds have followed the pattern of previous years- adults coming in first from early October to be replaced by birds of the year from late October/ early November on.Two birds have been recorded coming back for the past four years. It is too early to analyse this years sightings but our results from 2006 when we had 331 sightings of 97 different birds may be of interest. Of the 97 birds identified 55 birds were sighted on just one or two days but some visited much more often with one bird being recorded on 15 days. Of course we missed many sightings as coverage was incomplete. Close observation suggests that they are to sorting through the fine sand for the right sized particles. They can stay on the trays for up to 15 minutes. There is a very marked tendency for birds to keep together in a flock often visiting the table two or three times a morning as a group and returning with the same group days later.

A German study of 12 Bearded Tit gizzards found an average of 608 (range 470- 830) stones in the gizzards in autumn. No wonder they need to visit the trays often! They need grit at this time of year to help grind up the hard seed of the winter diet of reed seeds.

I have been asked by several birders if the taking on of grit increases the weight of the bird. We have lots of weight data but it would take a lot of effort to analyse it. However what we have done so far shows an increase of ca 0.7 grams from September to December, Bearded Tits average ca 14.5 grams. Of course other factors may be responsible for this weight increase.

Where are all the Goldcrests? 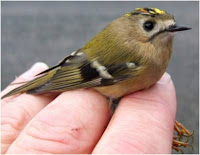 Although the ringing effort may have been less this autumn owing to the atrocious weather recently, this is still a very low number. Lack of Goldcrests is also backed up by regular observations at the site which have recorded very few seen or heard.

Recently, a ringer from Hilbre Island has reported NO Goldcrests ringed this Autumn (they have ringed an average of 50 birds per autumn over the past 10 years). This report has resulted in a flood of replies from around the country in similar vein.

One suggestion put forward has been that the windy and wet conditions could have prevented the birds from using the normal passage route southward and they might have moved south on a much more easterly line, avoiding the UK altogether. However, at Falsterbo in Sweden, they too have ringed only a quarter of their normal total so another explanation may be a very poor breeding season in the northern forests.

Ringing on the telly

from a posting on a ringers' blog site:

Last Thursday morning Wash Wader Ringing Group were accompanied by Countryfile on a catch of Sanderling. We are told this will air on BBC1 onSunday (at 6pm) though countryfile schedules can be a bit flexible. They should have some good footage of a cannon net being fired. Listen out for a shout of spoonbill as one flew past - and I missed because I was talking to camera at the time, how's that for dedication ... Cheers rob

thanks to Rob Robinson for the info

paul
Posted by North Lancs Ringing Group at 08:58 No comments:

Great excitement today at the grit tray at Leighton Moss when a male Bearded Tit with BTO ring over Blue on the left leg and Red over white on the right leg appeared. This bird was first ringed on 8/8/2002 as a juvenile male 7 years and 92 days ago making it the oldest Bearded Tit for the British Ringing scheme and beating the previous record of 7 years and 6 days also held by a Leighton Moss Bearded Tit, a male ringed in 1992. The bird visited the grit tray today on two occasions. It was re-trapped or sighted 5 times in 2007 but not at all in 2008 then re-trapped on 5/7/2009.

A Bittern ringed in the nest by the RSPB on 8/5/02 was sighted at the Lower Hide recently and the ring photographed nine years and 157 days after ringing again another British record. This bird was sexed a female by DNA analysis.

Yesterday at our feeding station at Teddy Heights near Arnside we caught a Coal Tit which was ringed 6 years and 290 days previously. A record for the group but the British record stands at 9 years.