Culinary tales from B.A.S. days were doing the rounds in the Bridge Inn, Wennington this evening

The most significant revelation was that Chin-strapped Penguins were good to eat. However, there was a very narrow window of quality and it was important to check the ring number on the bird to see if it was about 18 months old. This is the age of great delicacy, but any older ring numbers indicate that the bird would have tasted like gueno-infused leather! Best of the rest was that Blue-eyed Shag requires about 10 cms of fat to be drained off after boiling, then it tastes "quite nice".
Posted by North Lancs Ringing Group at 22:45 No comments: 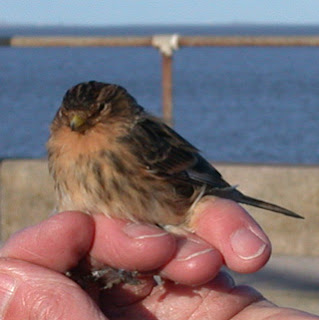 Caught today.
The yellow bill and unmarked throat indicates that this is a 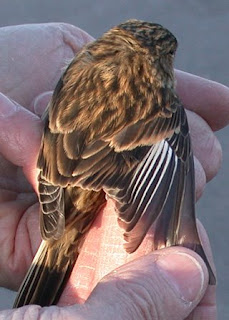 Twite and not a Linnet. So far so good. But is it male or female? As we can't see the rump (pink in a male) the wing should give a clue. On males the "white on the inner visible 5mm of the outer webs of the 7th to 9th primaries reaches the shafts, or is usually less than 0.5mm from" (Svennson) whereas on a female the "dark zone" is 0.5mm wide or more and generally half the width of the webs. Using this criterion the bird should be a male. But, in fact, the rump had no pink in it at all. The end of the tail feathers are obscured so you'll have to take my word for it that they were pointed and that it was therefore a young bird. A final mystery is how the heck does Alan keep his fingernails so clean when out ringing? Posted by Jean.

Posted by North Lancs Ringing Group at 20:42 No comments:

A colour-ringed Grey Wagtail was read by Guy McClelland on Red Nab (Heysham) this afternoon. This suggests that it is one of the tiny number of prospective wintering birds. Unfortunately it was from the days of using a single colour ring. Nevertheless, it can be narrowed down reasonably well to one of 11 1st calendar year birds ringed on either 4/09/07 (4) or 11/9/07 (7) at Heysham Nature Reserve.


This is perhaps surprising, because birds passing through at this time of year have been perceived to be lengthy-distance migrants. In this respect, there is no evidence of off-passage birds so early in the autumn (not until mid-October), therefore where it spent the 2007/8 winter is open to speculation. Also speculative is the possibility that it is of relatively local breeding-season origin, as perhaps suggested by a now adult bird which looks like spending the winter in this area.

More questions than answers!
Posted by North Lancs Ringing Group at 14:51 No comments: 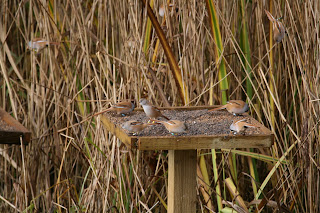 Bearded Tits have been showing well on the grit trays at Leighton Moss RSPB Reserve. Almost all of the birds are colour ringed as part of our study of the ecology of this very restricted and attractive species. The colour rings allow us to identify individuals. Some birds come only once or twice during the autumn but others have been recorded gritting almost every day. One male- (colour ringed yellow on the left leg and red over purple on the right) is one of these and he comes almost every day and tends to dominate the table often chasing other males off. The gritting season starts in late September when usually only adult birds are present. Birds of the year are not present until the middle of October. Numbers visiting gradually decline into November. The best time to see the birds is from 08.30- to 10.00. on a calm morning. This morning 10 were present . To date 38 different birds have been recorded visiting the grit tray this year.The oldest bird identified this year is in its 5th year. In previous years up to 97 different birds have been identified at the trays. They need grit in their gizzards to grind up the hard reed seeds which make up the bulk of their winter diet.
Posted by North Lancs Ringing Group at 16:14 No comments:

A 2008 Scottish-ringed young female Honey Buzzard, which was fitted with a solar-powered radio transmitter, has been lingering since about the 4th October, until the last signal received on the 18th October, at/near Tameguert (Morocco).

This bird roosted overnight 13th-14th September (2008) in our area near The Nook/Lupton - in a wood next to that grotty section of the A65 between the M6 motorway and Kirkby Lonsdale. Unfortunately, the following two days were cloudy and no signals were received until it was near Bury on 17th September

More detail on the history of this bird and more - click on the Honey Buzzard, not the out of position label!:
www.roydennis.org/
Posted by North Lancs Ringing Group at 13:14 No comments: 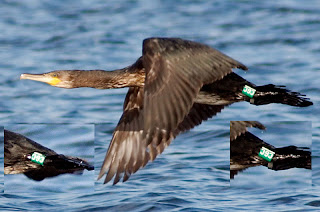 Not in our area, but emanating from a posting of Cliff Raby's excellent montage on the LDBWS site. Everyone who has read this Puffin-island-2008-ringed bird during its "high profile" stay at Marton Mere has labelled it 'C6C'. Stuart Newsom has had "quite a bit of grief over this bird" as the '6' is in fact a 'G'!
It could end up round here.................
Posted by North Lancs Ringing Group at 11:38 No comments:

Juvenile Shag should be traceable

Jon Wright and Richard du Feu braved all the weather had to throw at them today to read the ring numbers (or at least the last four numbers) on a juvenile Shag which had obligingly parked itself in Heysham Harbour. This should be enough to trace the individual.

Previous ringed Shags at Heysham have all been from Puffin Island, Anglesey. Will this bird be the same and will it be one that Richard ringed this year?

Feedback from Mark Grantham at the ringing office suggests a further number or especially two numbers would be ideal, otherwise we will have to wait until all the 2008 ringing returns are in to see whether the last four numbers 6618 is unique to a 2008-ringed Shag. The only other species taking this ring size are the two Divers, Pink-footed, Egyptian & White-fronted Goose, Gannet and Osprey, so any statisticians with absolutely nothing else to do can look at the average annual ringing totals of these species and come up with a probability of the current four numbers being enough.
Posted by North Lancs Ringing Group at 13:41 No comments: