Out Of Bounds Dipper

This superb photo of a colour ringed Dipper was taken by David Talbot on the River Kent in Levens Park on January 10th during the height of the cold spell. We have tracked it down to one ringed by Peter Mawby in his Dipper Study area which is centred on Sedbergh where he ringed 123 nestlings last year.

Although the movement is only about 16 kms it is the first time a Dipper has been recorded moving from the Lune and its tributaries to the Kent. Peter suggests that it seems probable that this winter's severe weather caused more young birds to move away than usual. He also reports that on recent visits to Sedbergh that the breeding territories are only very slowly being occupied. This time last year, despite the cold spell, nesting was well under way.

The BTO Migration Atlas shows that the average dispersal of young Dippers is only about 2.5 km and invariably within the same river system so this Dipper is quite unusual.

Peter would be very grateful for any other sightings of colour ringed Dippers. Please report them to this site. 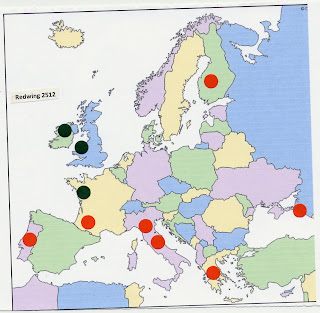 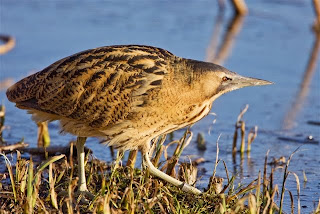 Yesterday we caught some Oystercatchers at Heysham helipad. As the Oystercatchers roosting there have not been caught on a regular basis until relatively recently only about 6% were already ringed. Of these some were very interesting:

Perhaps of more interest than the retraps was the age structure of the birds. 97% were full adults and all but one of the remainder were at least 2 years old. This is probably down to the hard weather over the 6 weeks causing immature birds either to die or to be in such poor condition they need to feed in fields over the high tide period.

The 15 dead birds I picked up on Foulney a couple of weeks ago in the cold were all immature birds or adults that had not completed their primary feather moult. All the adults we checked at Heysham had completed their primary moult suggesting that incomplete primary moult is not a big problem in the bay however those that had failed to complete were hit particularly hard by the cold weather.

Richard
Posted by Richard du Feu at 06:46 No comments: