Our birds continue to use the grit trays at Leighton Moss RSPB reserve. So far this season we have had reports of 307 sightings of invidually colour ringed birds. Of these 183 were males and 124 females. This involves 31 Males and 28 females. Of these 7 are 3 years old, 8 2 years,21 one year and 23 are this years juveniles.

The number of visits they pay to the grit trays varies greatly.Nineteen have been recorded on one day only. At the other extreme one male has been seen on 14 days. At each visit birds usually stop for 2 to 10 minutes scratching through the grit before moving on to feed on the reed seed.

Up to 3 unringed birds have been seen at the trays recently so we were very pleased to catch 3 unringed birds today bringing our total of new birds ringed this year to 33. One question observers at the grit trays often ask is wether taking on so much grit at this time of year increases the weight of the birds.Out of interest the average weight of the 6 birds caught today was 15.7 gms. The average weight of birds in June is just 14.1. Small sample but suggestive!

The reserve staff have put out three new trays in another area of the reserve but there has been no sightings over the past three weeks. It obviously takes them time to locate them. My friend Janusz in Poland put out trays three years ago with no success until this year but now they are using them regularly.
John 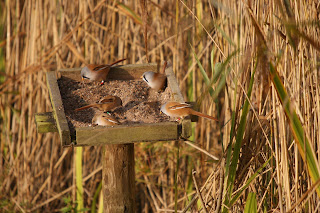