Pied Flycatchers on the Up 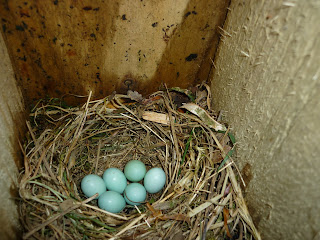 Have finally got together all the data on our Pied Flycatcher Retrapping Adults for Survival study in 13 woods in the Lune valley.

This year we had 92 nest boxes occupied. This compares with only 63 in 2010 and 54 in 2009. Most of the increase has come from the peripheral woods which have had nest boxes for several years. In two of these woods the population increased from just four pairs in 2009/10 to 11 this year. Of the 92 occupied boxes 76 were successful. In total we ringed 455 nestlings.

A total of 71 females and 19 males were caught. Three of these males were proved to be polygamous with the two boxes serviced being approximately 50, 75 and 100 metres apart.

Birds ringed as adults mainly returned to nest in the same wood in successive years. Out of 21 only 2 changed woods. But of 31 birds breeding for the first time only seven nested in the wood in which they were hatched the others moved to other woods. Birds ringed as nestlings in Durham and Derbyshire were found nesting in our boxes.

John
Posted by North Lancs Ringing Group at 17:37 No comments:

A very brief update on Sand Martins. It looks like the first brood or two of Juveniles are well on the way south as we had no retrap juveniles from previous sessions last night although about 70 retrap adults. The highlights from the last couple of nights have been:

X836637 - appears to be the 5th Control from Wintersett Reservoir this year, following on from 3 last year.

This series of 8 movements is very interesting. Wintersett is in effect on the other side of the Pennines and for most summer migrants not an obvious route south. The Pennine rivers do provide excellent breeding habitat for Sand Martin so I would guess these birds are in their wandering phase in June/July when caught in West Yorkshire.

Richard
Posted by Richard du Feu at 06:07 No comments:

Our ringing of Reed and Sedge Warblers over the past two days produced the first signs that adults of both species are preparing to leave on migration by putting on fat prior to their departure.

We caught smaller numbers of Sedge Warblers but one had a fat score of 3 and a weight of 12.6 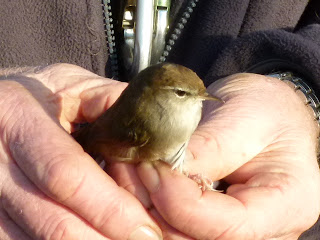 John
Posted by North Lancs Ringing Group at 07:53 No comments:

I could put a load of mindless trivia in this blog posting like retrapping 9 birds with successive ring numbers or controlling a bird where a reversal of two digits of the ring number would have made it one of ours, or even taking L333271 and L334271 out of successive bags when neither had been ringed at that colony (one moved 2km and the other 4km) however all these are just fairly uninteresting chance events. Of much more significance is the overall pattern of captures.

In 2011 we have caught a total of 1372 individuals so far, of which 1191 are new birds and the remainder are retraps or controls. These 181 birds are of most interest to the project. The tables below show where the birds were ringed in 2010 and where we have recaught them in 2011, with NOR and SOU being two colonies near Whittington, ARK being near Arkholme, NETB being near Tunstall and CDB being deep inside the Bowland fells.

A further bird ringed in 2010 by the group at Gressingham swallow roost has been caught at Tunstall. We have also retrapped 13 birds from 2009 and one from 2007.

Note the adults have been highly site faithful with the exception of those at site SOU. This colony is largely abandoned probably due to predation by rats and stoats last season with only a small part active this year. The adults could have moved 200 metres along the river to the northern colony however it appears like more have gone to Tunstall around 2km away. Last year we did not ring at the Tunstall colony so made two visits this year to find out how many of the birds at our existing RAS sites use it. The answer is clearly a lot (around 10% of adult birds caught were retraps from last year) and as a result we plan to extent our RAS scheme to include this colony.

The totals for 2011 for each site are as follows with the retrap figure excluding within year retraps and controls:

Of the 11 controls the most interesting is likely to be L597913 which we caught on 29th June and is a Juvenile. My guess is it is from Scotland however we will have to wait for the ringing unit to get back to us. Juveniles do make rapid movements in late June and July often visiting active colonies in search of sites to breed. Will this one return next year?
Posted by Richard du Feu at 15:11 No comments:

A Record at Last

The further re-trapping of Reed Warbler P503386 this morning means it establishes a new Group longetivity record for this species. When it was first re-trapped this year on 27th of June it was just 2 days short of beating the previous record. ( See my posting Almost a Record) But to days re-trap extends its time since ringing to nine years and 314 days and its still going strong.

It is not the oldest small passerine recorded by the group, this is a Great Tit ringed as a nestling and found dead 11 years and 97 days later.