Visited our small woodland feeding station yesterday morning and was amazed that with just two small nets set only 5 metres apart we caught 9 different Robins of which 7 were new birds. The two retraps were one from last year which has been a regular this autumn and another ringed as a bird of the year in October. So far this autumn we have paid 5 visits and on the previous four visits we have caught 2 on two of them and 3 on one and none at all on an October visit.So far this autumn we have caught 14 different birds. This compares with just 5 in the same period last year.

I realize that the territories of this normally territorial bird often break down with an abundant food supply but I have never caught so many Robins. It could be that food is short in the surrounding woodland and farmland, but there are other feeding stations in the gardens close by. Or has there been an influx of continental birds?
John
Posted by North Lancs Ringing Group at 08:38 No comments:


The Bearded Tit gritting season at RSPB Leighton Moss, has just about finished. In total I have received details of 355 colour ringed sightings of 69 different birds. Of these 41 are adults and 28 birds of the year. Gritting started early this year in mid September and it appears to have finished earlier than usual. The number of times that birds visit varies considerably. Two birds both adults, were recorded on 15 days. While 20 birds were recorded just once. The ones that visit the most usually follow the pattern of gritting for a few days early in the season and then have a second bout of gritting, probably to top up later in the season.
One of the joys of watching the birds so relatively close is the pleasure visitors get out of seeing these usually difficult to see birds so close and for so long. Last week I had three people who had been visiting the reserve for 20 year but this was the first time they had seen Bearded Tits.Their joy knew no bounds.

The high water levels following heavy rain has restricted our ringing activities so I had time to look at our Reed Warbler data. Reed Warblers are one of our longest lived small birds. Of 1173 recaptures of adult birds I found the numbers of each age class from one to ten years as follows- One year 622, 2 year 239, 3 year 147, 4 year 85, 5 year 38, 6 year 23 ,7 year 7,8 year 8, 9 year 2 and 10 year 2.
The thought of a small bird making 10 return journeys to West Africa is really amazing. Their navigation skills are incredible.
John
Posted by North Lancs Ringing Group at 19:33 No comments:

On the 22nd September 2017 519 Knot were colour ringed at Formby point (see previous posts).  In the first couple of weeks we received about 100 sightings from the local area with good numbers feeding in land at Caldy wildfowl collection.  I knew Black-tailed godwit fed on swollen grain readily however I had never heard of Knot doing this.

In the 74 days since ringing we have now received over 860 resightings of over 350 individuals from 15 observers.  So far four birds have been seen in Ireland (Dublin bay and Wexford) and five to Morecambe bay with the remainder remaining around Liverpool bay. 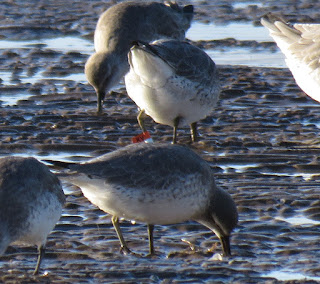 To put some some of scale on these data in the last 10 years a total of 328 Knot have been re-encountered (mostly retrapped) within the same estuary as their ringing site. In just over 2 months the efforts of 4 main observers have nearly tripled that total.  Assuming the level of observer effort continues and ideally increases we will be able to achieve estimates of survival at a resolution never before achieved on a UK knot population before.

Additionally with a moderately consistent observer effort periods of emigration from the population should be detectable by seeing an increase in relative frequency of observations of the remaining birds.  Immigration is much harder to detect unless there is an arrival of colour marked birds from elsewhere.  Using sightings of these birds going elsewhere and observed emigration we will build up a picture of how individuals that moult in Liverpool bay use other wintering grounds in Northern Europe.

As always any sightings of colour marked Knot with an orange engraved flag should be sent to Jim Wilson who co-ordinates this colour mark scheme.  Many thanks to Rose Maciewicz, Peter Knight, Richard Smith, Steve Hinde and the 11 other observers of colour marked Knot so far. Every sighting is valuable to the project and the results are so dependant on individual observations.

Many thanks to Richard Smith for the photo.