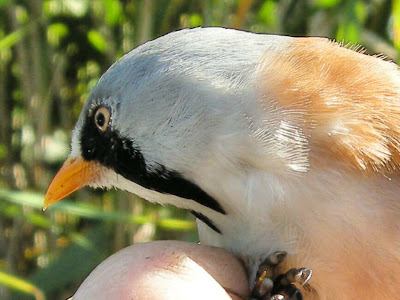 To date, this year we have caught 24 adult Bearded Tits at Leighton Moss . Of the 24, 14 are males and 10 Females. Of the 14 males 5 are 3 years old or older but the oldest female is only in its third year. This is obviously a small sample so I looked at our records since 2000

Of course these results need testing statistically, but it does appears that males survive better than females.
John wilson
Posted by North Lancs Ringing Group at 11:45 1 comment:

A Bearded Tit originally ringed at Leighton Moss as a juvenile male on 08/08/02 was re-trapped this week 6 years and 331 days after ringing. We have a special programme running at Leighton Moss on Bearded Tits and all birds caught are colour ringed. This allows us to identify the bird without catching them and has been very useful in seeing which birds use the grit trays along the Causeway during autumn and early winter. This bird was seen there once each in 04 and o6 but on 4 occasions in 07 but not in either 06 or 08.

They need grit in their gizzards at this time of year as they change from the summer diet of soft insects to the much harder autumn and winter diet of reed seed.

This week we have caught a Reed Warbler at Leighton Moss which was first ringed there on 23/07/01. that makes it 7 years 342 days since ringing, almost 8 years. However it was an adult when caught so it is at least 9 years old. The oldest Reed Warbler the group has recorded to date was 10 years old. The oldest Reed Warbler recorded by the National Ringing Scheme was 13 years- so our bird has a bit to go. The interesting thing is that it had never been retrapped during the 8 years until this year.
We have also had two other long livers this spring at 6 years and 302 days and 5 years and 309 days. These two birds have also not been regularly re-trapped. They have obviously breeding away from our ringing rides. This year though much of the reedbed was seriously trashed by the roosting Starlings so there may well have been a re-distribution of breeding birds.

The sand martin season has begun with 2 visits made to 2 colonies and 1 to a third. In 2008 we failed to ring any sand martins due to the river being very high throughout the season. As a result our retrap rate of birds has been exceptionally low.

The bird ringed in 2003 is now just 2 years short of the longevitity record for Sand Martin the UK and Ireland.

As the Arkholme colony is closer to the river level than the Burrow colony it is likely birds using it last year have moved elsewhere due to the poor breeding success they had or were killed during flooding. As a result the low retrap rate is not too surprising.

In other news there have been recent sightings of colour ringed birds including:
Scottish ringed Greenshank at Leighton Moss which was present for 2 months last year. It arrived 4 days late this year!
Colour ringed Little Egret, origin as yet unknown, at Leighton Moss
Redshank with an orange flag from France seen at Leighton Moss
Black Headed Gull at Teal Bay (Morecambe) ringed in Denmark, present 2 years ago.

2 Knot caught at Heysham at Easter 2008 have been recaught (and resighted) in northern Norway (Porsangerfjord) on their spring migration to the breeding grounds in Canada and Greenland.