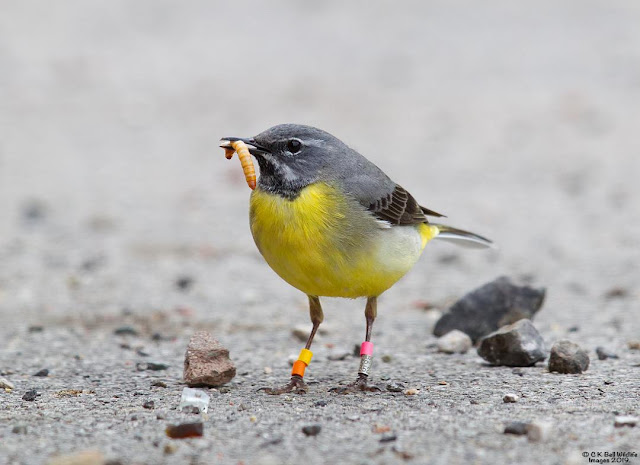 John
Posted by North Lancs Ringing Group at 16:48 No comments:

Following on from John's post, I paid my first trip to the nest boxes in Pott Yeats, Littledale today.  There are 43 boxes there that have held small numbers of Pied Flycatchers in recent years, 2018 was typical with 5 pairs all successful.  Today nine nests were found with eggs in all and females incubating in three of them (One nest contained 10 warm eggs).

Two further Redstart nests were found with incubating females in place.  Interestingly, both nests were in boxes with ‘normal’ circular entrance holes.  The small number of boxes with ‘shuttlecock’ shaped holes intended for Redstarts have never attracted any of that species over the last few years but one of this year’s Pied Flycatchers has occupied  a ‘shuttlecock’ box.

Blue Tit and Great Tit numbers this year so far are about average.
Alan
Posted by North Lancs Ringing Group at 19:21 No comments:

With a couple of visits to most of our woodland sites in the Lune valley we are getting first impressions of this years Pied Flycatcher population. Last year we had 108 pairs in nest boxes in our 16 woods providing a RAS study. First impressions are that population are similar or in  5 cases slightly up on last year and it is still early days. The one exception has been our 12 nest boxes in a mainly alder wood. There has been clear felling of larch right next to the site and two boxes right next to the conifers in Oak which have always been occupied by Pied Flycatchers were empty this week but a male was singing close by. In some other years we have had a second later arrival, so lets hope. Similar on a visit today to the site with the smallest population there were two females incubating and a male singing round empty nest boxes.

First impression for other nest box species is that Great Tits are about normal but Blue Tits are well down. Both species have broods hatching and appear to be doing well but the next two weeks will reveal all.
John


Posted by North Lancs Ringing Group at 19:40 No comments: