Over the last 18 years we have ringed 988 Grey Wagtails. Since 2008 we have been colour ringing those caught on passage along the coast at Heysham. Up to this year we have had 18 recoveries with all being either colour ring sightings, or recapture by other ringers, no birds have been reported dead. These recoveries show that our birds winter mainly in the  Chesire/Merseyside/ Greater Manchester area with single birds reported  from Wiltshire, Staffordshire and Pembroke.

However  this March we have had two reports of dead birds. The first was in Shropshire on March 1st. It was reported as being in poor condition indicating cold  weather. It had been ringed as a juvenile on September 25th 2017 at Heysham and had moved 137 km. The other was killed by flying into a balcony window in Conwy North Wales on March 13th. One can only assume that this bird was searching for food in an unusual  habitat during cold weather. It had moved 99 km and had been ringed on September 14th 2016.

So far the only local report of a dead bird during the cold spell was a Blue Tit . However we have been fortunate with only a short lived  covering of snow. 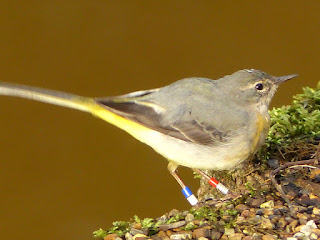 Posted by North Lancs Ringing Group at 19:27 No comments:

A regular visitor to Leighton Moss was very lucky to see a pair of Bearded Tits on the grit trays at 08.00 this morning. Visits to the grit trays are  most unusual at this time of year. Over the past 15 years of our colour ringing study at Leighton we have only had six grit tray sightings in March. Fortunately he  took some photos and we were able to work out their history.

Another excellent example of Bearded Tits forming pairs in their first autumn and remaining faithful in subsquent years.We have recorded such behaviour on many ocasions but this is outstanding.

Will be interesting to see if there are any more grit tray sightings in this cold spring. Fortunately we have no snow but it has been very cold. Usually by this time of year there are numbers of insects appearing for the Beardies to catch, but not this year so they are probably still  feeding on reed seed for which they need grit in the gizzard to grind up.
John 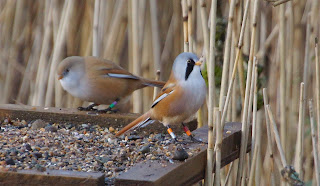 Posted by North Lancs Ringing Group at 17:34 No comments: