Its been a rather frustrating season to date compared with the previous nine years of our study of gritting behavior. This weekend was typical, 15 birds (all colour ringed) on the trays on Saturday,  so full of hope I canceled plans to ring and spent Sunday morning watching empty grit trays on what appeared to be a really suitable morning-calm and cold. Frustrating to say the least.

However a  quick look at the sightings to date produced some interesting findings. In total to date we have recorded 176 sightings of colour ringed birds. This compares with 290 for the same period last year. But there are more young birds this year (45 compared with 17 in 2012). However we have recorded 25 different adults and 28 birds of the year visiting the trays this year, compared with 29 adults and 11 young birds in 2012. Effort have been very similar,  so we have recorded more individual birds this year but they are obviously visiting the trays less often. In 2012 one bird visited on 22 days. This year  the largest numbers of days by an individual  was just 10. I suggested in a recent posting that the mild weather and low water levels may be the reason for the  lower use of the trays

Overall though survival this year to date has been good. We ringed  21 nestlings and 16 of these survived to at least 2 months. Of the 45 juveniles ringed, 38  at least survived to early August and 32 of these have been recorded post moult.

Survival over last winter has also been good for  of the 17 birds ringed as juveniles in 2012 no fewer that 13 have been recorded  this year, a crude survival rate of 78%.

Posted by North Lancs Ringing Group at 16:58 No comments:

The latest batch of recoveries included some interesting movements-
A Willow Warbler ringed near Carlisle at 08.45 on  on 6th of August was caught at Leighton 80 km south 25 hours later while a Chiffchaff ringed at Heysham on 28th September was caught at Orfordness in Suffolk eight days later, a distance of 370 kms.

A little more usual were two Sedge Warblers in France bringing our total of Sedge Warblers reported on migration through France to 43. A juvenile had traveled 705 kms in 13 days.

This late summer/autumn has been exceptional for the numbers of Mediterranean Gulls frequenting especially the Heysham power Station Outfalls. The rings or colour rings were noted on four birds. Three had been ringed as nestlings in The Netherlands and one in Germany. These now bring the totals of birds reported in our area to The Netherlands 6, Belgium 4, France 2, Germany 1  and Poland  4. All except two of he Polish birds were ringed as nestling's.  Many of them have returned in successive years with others moving to other wintering areas.

Our ringing of both Siskin and Lesser Redpoll has increased recently with Mark and Dave contributing good numbers in Bowland. A Lesser Redpoll ringed there on May 5th was caught in Glen  Clova in Aungus on 8th of October a movement of 342 km North. We have ringed similar numbers of these two species over the years but this is only our 4th Lesser Redpoll in Scotland. By contrast we now have 35 Siskin from Scotland including one in this batch in Lanarkshire.

A Goldfinch ringed here on 15 of October was caught, presumably in its wintering area at Ascot 330 km SSE on the 3rd of March. We have several other similar recoveries.


Posted by North Lancs Ringing Group at 12:08 No comments:

First Twite Captures Under Our Own Colour Scheme

Over the last few days the first arrivals of passage/wintering Twite have been present at Heysham Harbour.  This morning finally saw weather that was suitable for a catching attempt.
Three whoosh net operations resulted in the capture of 21 Linnet (including 4 retraps), 14 Goldfinch (including 5 retraps and one colour ringed control from Walney Island, which I understand was ringed there on 29/09/2013)  and 9 Twite comprising 5 new birds, 2 retraps and 2 controls.
The Twite controls consisted of another individual ringed at Machrihanish Bird Observatory in autumn 2012 and a returning bird ringed on Sanda Island (04/07/2012).
The 5 new birds were the first to be ringed under our own colour scheme that identifies each individual.  An example of the arrangement is illustrated here:

Posted after lengthy difficulties in getting access to the blog again!!   ajd
Posted by North Lancs Ringing Group at 17:23 1 comment: 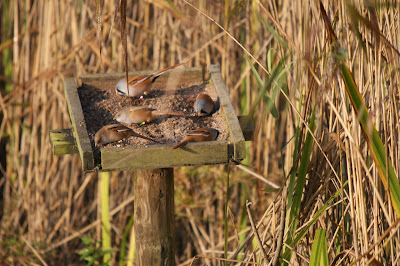 John
Posted by North Lancs Ringing Group at 19:19 No comments: