Tits Struggle in the Poor Weather

Just finished the first tranche of  ringing  in the nest boxes. To date have ringed 142 tit nestlings. Both Blue and Great Tits are a week to 10 days later than last year. Have compared  the brood size with last year for May ringing.

Only have two Marsh  Tits in boxes but both have fledged 7 young and my two Nuthatches have 7 young each.

Our Pied Flycatchers are just starting to hatch so hope the forecast of better weather by mid week turns out to be right.
John 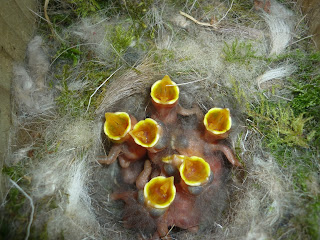 Cetti's Warblers on the Move

Cetti's Warbler have only recently colonised our area, mainly at Leighton Moss RSPB. Although we ringed single birds in 1995, 2007 and 2008. It was not until 2009 that we caught more than one in a year. In total we have only ringed 31 birds but three of these have been controlled  elsewhere. The latest was a bird ringed at Leighton in early October 2014 and controlled presumably breeding at Woolston Eyes  Cheshire in mid April 2015 a movement of 89 km south. One controlled at Middleton NR on 28th September  had been ringed 68 days previously and 106 km ESE at Wintersett Reservoir in West Yorkshire. Pride of place though goes to one ringed at Leighton on 13th March 2010 and caught just over a year later at Farlington Marsh Portsmouth 389 km SSE. It was re-trapped at this site  on four other occasions over the next year so was probably breeding there. This is one of the longest movements recorded within Britain.

Once established Cetti's Warblers are thought to be sedentary. But  there appears to be some dispersal of young birds presumably mainly in their first summer and autumn as is shown by the  Woolston Eyes and Wintersett birds detailed above , that this can continue into late winter and spring is shown by the Farlington Marsh bird.

Posted by North Lancs Ringing Group at 17:00 No comments:

Over the years the Group has ringed 9085 Pied Flys. Birds ringed as breeding adults manly return to the same wood but 15% moved within the Lune Valley and a very few move further afield. Only 3.9% of birds ringed as nestlings  are traced again. Of the returning birds 34% breed in their natal wood, 50% moved elsewhere in the Lune Valley and 16% move further afield to northern England south west  Scotland and Wales . One though was found nesting in western Germany and another caught on spring passage in Holland on May 4th and then found 33 days later in a nest box in Denmark.

I have visited two of my nest box schemes over the past two days. Both are much later than last year but there was a interesting attitudinal difference . In the one at sea level out of 20 occupied boxes 6, all Great Tits were incubating, although they have only just got started. By this time in 2014 almost all were well into incubation.

In the scheme at around 200 metres no tits were incubating and only 9 had incomplete clutches. On the same day last year 8 were incubating and 6 had incomplete clutches. The great thing though at this upland Oak woodland was the numbers of Pied Flycatchers singing and entering nest boxes with 13  nests many of them complete.Some of these will turn out to be 'cock nests' but this compares with just seven pairs in 2014. This wood is part of our RAS Pied Flycatcher study and it was great to see 4 of the birds we got a good look at were ringed.

It was a great morning though. We ringed a further 11 Lapwing nestlings and it was great to see 2 families of 3 each, which we ringed a week ago were all still alive and sporting their rings! A visit to a farmer friend to inspect a  Barn Owl box we gave him last year produced a clutch of 4.  Cuckoos were calling and many Snipe drumming.
John
Posted by North Lancs Ringing Group at 19:32 No comments: