It seems like a long time since May and June (and the birds in question will be thousands of miles away by now) but it was a good year for birds using nest boxes in the Lune and its tributaries. There were at least 43 nesting attempts in our nestboxes, of which, 35 successfully fledged young.

Great Tit and Blue Tit numbers were down following two poor breeding years, but productivity and survival have been good and there are tits in the woods - there is so much food around that it may be a while before they make it into gardens and towns.

Many thanks to the ringers, helpers, nest box providers and landowners who have supported our project - if you wish to get involved next year, please let me know at paul.cammack@cumbria.ac.uk
Posted by North Lancs Ringing Group at 15:37 No comments:

Today I asked two very regular birders who visit Leighton Moos several times a week how often they see Reed Buntings at this time of year. Both replied that the most they see in a day is up to two feeding or gritting on the paths. When I told them that today we had caught 18 in one small area they were amazed. Obviously the birds are feeding quietly within the reedbed not calling or showing themselves.

Since October 1st this year we have ringed on 12 days and caught 117 Reed Buntings. The interesting thing is that we have only retrapped one of these. This means either there is a steady movement through of birds or that there is a very large population indeed.

Ringing returns suggest that there is a movement from the reserve at this time of year. In total over the years we have had eight birds found wintering in the Merseyside to Cheshire area. We have also had one that went to the south coast being ringed at Leighton in August and caught the following October in Dorset 386 kms south.
Posted by North Lancs Ringing Group at 18:59 No comments: 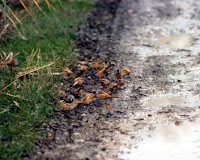 The use by Bearded Tits of the grit trays at Leighton Moss have been exciting a lot of interest this year. I thought some back ground information on the development of the trays may be of interest along with our findings from colour ringing the birds.
For many year Bearded Tits used to grit on the gravel paths. The rather poor photo shows a shot taken c 1993 with 22 bearded tits all gritting on the paths. In c 1996 I had the idea to provide grit trays and they have been used ever since and use of the paths has stopped. Birds gritting on the path were subject to a lot of disturbance but the present arrangement allows lots of people to see (and photograph) these super birds.
Bearded Tits need grit at this time of year because they are changing from the soft insect diet of summer to the harder mainly reed seed diet of winter. The grit sits in the gizzard and so grinds up the seeds.
We are also responsible for the colour rings you can see on all but a few birds. The birds are colour ringed as part of a long term (25 years) population and DNA study of this very local species. Remember Leighton Moss is the only place you can regularly see this evocative species in the North West.
The colour rings have also enabled us to study their gritting habits. Every year the adult birds come first to the trays from about mid September to mid October almost all the birds gritting are adults but as the season progresses birds of the year move in. This year to date we have identified 51 different birds using the trays 23 of them adults and 28 this year's young ones. So far this year we have ringed 104 young bearded tits the largest number since 2000 so many more may yet visit the trays.

Blue Tits have a Record Season

Our ringing of blue tits to date suggests that they are on track for an excellent season. Despite a rather low breeding population in our nest boxes following two years of poor productivity the numbers of fledged young was high.

Ringing since then has recorded a high population suggesting good survival . Leighton Moss is typical with 369 caught to date 77 up on the whole of 2008. There is still two and a half months yet to go in which we normally catch many birds. Another pointer to productivity is the percentage of adult birds in the catch. In 2008 it was 21% this year it is only 7% the best since 2006.

Blue tits are normally quite sedentary but in years of high population they often irrupt with birds moving some distance. A pointer that this may happen this year is an adult bird ringed at Heysham on 8/10 and caught six days later at Leighton Moss, a movement of 17 kms in just five days. Not exactly in the same league as our true migrants but still unusual for a blue tit.

At the late September meeting of Lancaster and District BWS most members reported no unusual numbers of Blue Tits at their garden feeders. However all the signs are that there is a large amount of natural food available with a good beech mast and berry crop.

ARE BEARDED TITS PREPARING TO IRRUPT? 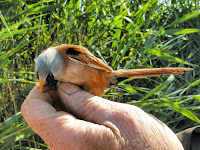 Bearded Tits have had their best season at Leighton Moss since the crash in the population in the 2000/2001 winter. To date we have caught 92 free flying juveniles 41 more than last year. Juvenile survival has been very good- of 16 ringed as nestlings no fewer than 13 have been caught as free flying juveniles. This included 5 out of a brood off 6 ringed in a nest box just 4 m. from a Marsh Harrier nest!. There has also been at least one very late brood, just recently we have caught three in juvenile plumage. A male was caught yesterday and it was just starting to moult and still in full juvenile plumage. So must have been hatched in mid to late August.

The first brood younsters are now very active and showing well. We have been recording fat scores and weight of all the birds we have caught. Recently almost all first brood youngsters have some fat in the trachael pit and they have on the average increased their weight by almost 1.5 grams since August.Is this laying down of fat in preparation for a move?

In some years prior to 2000 some bearded tits have irrupted away from Leighton usually in late October and early November We have had sightings from Marton Mere near Blackpool and birds caught in Bolton, Coventry and three in South Yorshire.

If you do see birds away from Leighton please check for rings as all our birds are colour ringed. (A BTO metal ring and three colours). Please note carefully the position of the colour rings and report them on this site. Many thanks.