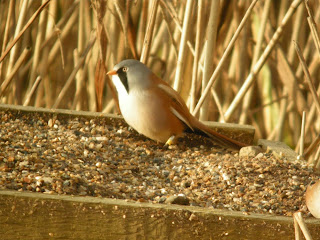 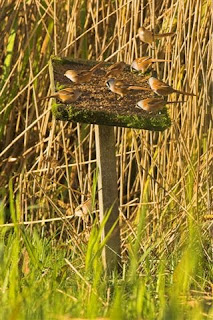 The grit tray season is well under way with a total of 62 sightings recorded,mainly from Keith Kellet and Brian Howson, over the past five days. We have also caught a further 30 birds at three different sites around the Moss, To date we have ringed 82 juveniles and 38 Adult males and 21 Adult females. So the imbalance between the sexes continues.

Perhaps the most interesting finding was the catching of a female which had been ringed as a nestling in one of our wigwam nest boxes on 20/5/04 making it six years and 129 days old. Certainly our oldest female to date, and probably a British record. The Oldest male this period was five years and 59 days. Although our oldest Bearded Tit of all was a male at 7 year and 42 days a British Record it was still alive in October 2009.

Another interesting observation was the catching of three birds (2 males and a female) with consecutive ring numbers, they had all been ringed as nestling's in the same brood in May 2009. This shows excellent survival but it is most unusual for siblings to be found together after such a period.

The 62 grit tray sightings involved 33 birds, of these only 8 were birds hatched this year. This preponderance of adults early in the gritting season has been recorded in all previous years studied - the young birds only appearing in numbers by mid October.


John
Posted by North Lancs Ringing Group at 15:40 No comments:

Better day in the woods

after the poor show a fortnight earlier, Saturday was more like it, even though I slept in and didn't get to the woods til 8.30 after having to scrape ice off the car.

Interestingly, very few Blue Tits on the feeder but plenty in the canopy - there is probably still plenty up there for them to feed on at the moment.

Paul
Posted by North Lancs Ringing Group at 08:41 No comments:

How to catch Grey Wagtails

The simplest and most efficient way of catching Grey Wagtails at Heysham is to create a 'corridor' pointing north-westerly in an otherwise fairly enclosed mist net ride (or whichever degree of northerly is the favoured direction of autumnal migrants at your site) and place a CLEAR tape (Roche works very well) under or behind the net. Try and make sure that the location does not have an easy perch behind the net (a nice dense bush without obvious open branches is best - also giving the net shelter/background), or the birds may fly beyond and see/then avoid the net

There is absolutely no need to "make the site open" for an "open area-loving" species. Grey Wagtails dont mind enclosure at all, indeed quite the opposite e.g. along the gloomy 'gorge' section of the Hindburn at Millhouses, therefore it is not a problem bringing them into a relatively enclosed area where your mist net has the necessary 'background'. Creating the corridor along the natural flightline of the autumnal migrants is a similar principle to landing an aircraft!

Pete
Posted by North Lancs Ringing Group at 11:55 No comments: 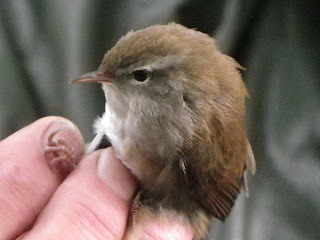 John
Posted by North Lancs Ringing Group at 14:33 No comments: 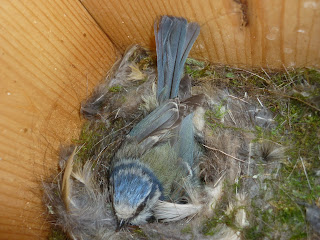 
John
Posted by North Lancs Ringing Group at 16:08 No comments:

It all looked so promising! Relatively calm in the woods, plenty of birds around when I checked the feeders earlier in the week, but only 6 birds caught!

Well, that is what happens sometimes. Ringing isn't all action-packed fun!

paul
Posted by North Lancs Ringing Group at 10:31 No comments:

Willow Warblers Have a Bumper Season

Willow Warblers appear to have had a most successful breeding season, at least judging by the numbers ringed by the group. At Leighton Moss where ringing effort is similar each year we ringed only 75 in August 2009 but no fewer than 315 this year. There was a very marked passage during the last few days of August which has continued with slightly lower numbers into early September by the 4th we had ringed 393in total. At Heysham and Middleton there has been a simialr increase, only 10 in August 2009 but 43 this August.

Chiffchaffs have also been passing through although in smaller numbers. Their main passage is usually early to mid September but we ringed 42 this year in August compared with 32 last August.

By contrast Reed and Sedge Warblers after an excellent early season have droppedoff markedly in August compared to other years, possibly the second broods failed during the wet weather in July and August.
John
Posted by North Lancs Ringing Group at 17:18 No comments: