The Usual and the Unexpected

A recent batch of recoveries continued a handful of records that follow the usual pattern but also three that break new ground.

The usual first. Two Sand Martins  both in the same locality in France brings our total to 40 recoveries that we have had  in that country, almost all on their way south in late summer. These two  were both adults ringed while nesting in the colonies in the sandy banks of the River Lune. One though was  a little unusual  as it was caught on 26th July in Charente-Maritime 933 kms to the south. It was an adult female and in a normal year one would have  expected it to be busy raising a second brood at this time of year. But the summer of 2012 was anything but usual with heavy rain flooding out some colonies, so this bird probably headed south earlier than usual. The second was also quite early, a male already in France  by August 10th.

Two Sedge Warblers were also reported from  France and again both at the same locality in Loire-Atlantique both had been ringed in 2012 and both were re-trapped in August in France bringing our total recovered there to 39, the bulk of them in August. One was  a juvenile and it was in France just 17 days after ringing.

The controlling of a Twite in both November and  December at our Heysham feeding station from Machrihanish Bird Observatory in Argyll & Bute is the 23rd bird to move between the two sites, establishing a strong link between the breeding and wintering areas.

Turning to the unusual. This year Goldfinch have also been using the feeding station at Heysham and a juvenile caught there on November 5th had been ringed on 21st August near Oban in Argyll & Bute. Had it moved down with the Twite? It is only our second Goldfinch from Scotland.

Coal Tits have been present in good numbers at our feeding stations this winter. We  postulated that they had  originated in the Lakeland conifer plantations and the catching of one in early December at our feeding station near Arnside that had been ringed just 58 days previously 63 km to the north in northern Cumbria proved us right. It is the second longest movement we have recorded for Coal Tit only one from Durham 92 km in 1987 beats it.

Finally the most unexpected was a Reed Bunting ringed as a juvenile female at Middleton on 18th August and  caught on  6th May at Cardiff Wetland Reserve. One presumes that it was a locally bred Middleton bird but had moved the 286 km  to South Wales to breed. All our other  distant movements of Reed Bunting have been to  wintering sites in the south of England or the Midlands.

John
Posted by North Lancs Ringing Group at 17:21 No comments:

Administration at the ringing office ground to a halt when a Kittiwake with a darvic ring black on yellow H32 was photographed at Heysham about a week ago.  There was no trace of it!  It is still at Heysham and here is a much better pic taken today: 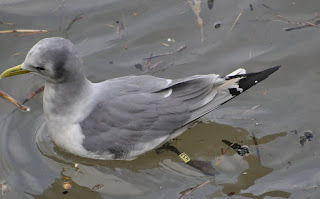 I dont know what the longevity record is for darvic rings of this size, but the wintering Broadway (now metal-ring-only) Med Gull used to possess one which lasted about 7 years and similarly, the last time Polish P96 was seen around Lancaster (2 winters ago), the ring looked like it was about to drop off - and this bird is either an intermittently seen 'unread metal-only bird' or it has disappeared altogether.  So 10 years sounds a reasonable age for a darvic ring, but this one should be 24 years old!

Assuming this is the same bird which was originally ringed with H32, the history is as follows
Ringed:  as a pullus at Waterford, Ireland in 1989
Seen: Seaforth Nature Reserve 25/5/1991, 11/6/1991, 16/8/1998
This information was obtained in the late 1990s by Steve White but he cannot remember how (Steve deals with hundreds of darvic and metal-ringed birds at Seaforth)

Subsequently:
Seen: Seaforth Nature Reserve 23/8/2008 (photo).
Unbeknown to Steve White, this had been sent in by another observer, but 'no trace found of origin'.  It came to light after the Heysham sighting was posted on the Heysham Obs Blog:

Seen:  Heysham Harbour 5/2/2013-(at least)11/2/2013
This bird is currently residing around the waterfall in the harbour.  Whilst it might have seen the Peel Ports logo and felt just at home here as at Seaforth, this area of the harbour is very much a rehab or zimmerframe zone....and this is the last remaining Kittiwake after the strong onshore winds.  Hopefully it will survive and perhaps reappear at Seaforth or, better still, prove to be one of the nesting birds at the "new" colony along the docks at Liverpool

The metal ring was photographed today, albeit underwater but the photograher said that there didnt appear to be any visible letters or numbers - that would certainly fit with it being a 24-year old ring! 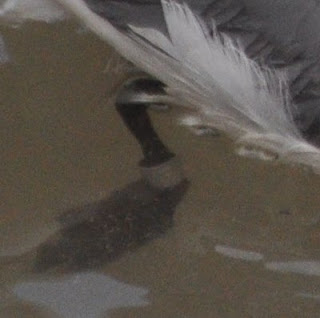 However, the jury is still slightly out on this one until it can be proven beyond doubt that a darvic ring can stay on a seabird for 24 years.  The case does seem pretty compelling however.  In no way should this account be interpreted as a slight on the efficiency of the BTO as they were not involved in monitoring colour rings at the time of ringing and this is an old scheme which had neither registered on the BTO radar, nor the Dirk Raes site - probably the only bird left alive and almost certainly the only up and still running darvic ring from the project!

Thanks to Janet Packham for the published pics.

Posted by North Lancs Ringing Group at 21:02 No comments:

First indications are that it could be a good late winter and spring for Siskin visiting garden feeders. Paul caught 22 in his Lancaster garden yesterday, including a  control. Andrew has started catching small numbers in his Over Kellet garden  and Mark in Bowland has been catching them from late January.

In total the Group have ringed 1660 Siskin over the years mainly in gardens in late winter and early spring . These have generated 47 recoveries which firstly reveal the breeding area of our wintering birds to be Northern Scotland (12), Southern Scotland (9) and one in southern Sweden, rather sadly killed by a cat.

Birds caught in our gardens in late winter or early spring have been wintering right across southern England from Suffolk and Kent through Surrey and Greater London to Hampshire and Shropshire. They have also been mainly ringed in gardens and are passing through our area one assumes on their way to the breeding areas in Scotland.

John
Posted by North Lancs Ringing Group at 16:46 No comments: