Thanks to the hard work of  Keith Kellet , the Gallagher family and other helpers we have achieved coverage of the grit trays on almost every suitable morning since the season started on September 29th. To date we have recorded  230 sightings of 35 different colour ringed birds using the trays. Of these 23 are adults and 12 birds of the year. This year has followed the usual pattern of adults coming early in the period and young birds  waiting mainly  until the end of October.

This year we have been recording how long  each bird stops on the tray sorting through the grit.This has varied between two and 15 minutes with an average of about 7.5 minutes. One bird seems quite addicted, it has been recorded visiting the tray on 19 days so far this year, and on some days it has visited on up to three occasions. It is a three year old female and in 2010 it was recorded as visiting on 21 days and in 2011 on 22 days just two days short of the record. On  nine occasions it has been accompanied by a two year old male.

This year for the first time  since 1997 irruptive behavior has been recorded. This involves excited calling from the reeds, then the birds take off gaining height up to ca60 feet above the reeds. On two occasions they were seen to drop back into the reeds but on one occasion on 20th October 4 appeared to leave. Two theories have been put forward to explain this behavior. One that it is a reaction to a high population. The other that it occurs in years when there is a poor reed seed crop. Certainly the first theory does not apply this year for the productivity has been very low due to the wet summer and the resulting high water levels. This may also have affected seed production so in-line with the second theory.
John

Posted by North Lancs Ringing Group at 19:32 No comments:

Our recent postings have shown  how abundant Coal tits have been this autumn. But what about the other tits, how are they faring?

I looked at the catches of Blue and Great Tits at four of our regularly manned sites- Teddy Heights, Leighton Moss, Over Kellet and Heysham. Effort between years has been similar.

The Great Tit catch this autumn has been 118 compared to 129 in 2011. So very similar between the years.

By contrast Blue Tits totaled 280 this year compared to 664 last year, a decline of 58% between years.

Why there should be such a contrast between the species is interesting. A quick look at our nest box results suggested that both species produced fledged young somewhat below average but certainly not catastrophic. It looks as though post breeding survival in blue tits must have been very poor.

Will be interesting to see what happens this winter and especially  next spring to see  what the occupation rate will be in  our nest boxes.
John
Posted by North Lancs Ringing Group at 14:31 1 comment:

Going back to the species of the month (Coal Tit), yesterday's population estimate was 41, today's is 35.  Combining the captures from both days gives an estimate of 40.  This feels about right as when counting birds on the feeder about 3 out of every 5 visits were by ringed birds and there are at least 24 marked birds using the garden at the moment.


Anyway, the good news is there isn't enough light in the morning or evening at the moment to ring before or after work so updates on Lancaster's Coal Tits will be limited for a week or two.

Richard
Posted by Richard du Feu at 21:28 No comments:

Several people have commented on the vast numbers of Coal Tits about this autumn locally.  Today I decided to ring in the garden with a single 9 metre net to see just how many Coal Tits there are using the garden.  In 3 hours this morning and a further hour and a half this afternoon I caught 58 birds.  The catch totals were:

Over one third of the catch being Coal Tits is pretty stunning however 4 of the retraps were 'same days' which I always record as doing population estimation is much easier with them.  Ringing and Migration volume 4 page 225 has a really handy table for population estimation and taking the numbers I have suggests there are about 40 coal tits using the garden today.  My captures for October (33 individuals encountered, 11 re-encountered) suggest a population of around 70.  Although the sample sizes are small such different estimates could suggest quite a bit of turnover within the garden.

The Bullfinch is the first I've seen in the garden since September.  Another one was present although not caught.  The goldcrest is a new species for the garden although I've seen and heard some before there.

Perhaps the highlight was the Blackcap which weighed in at a massive 24.4g.  Looking through the group's records of Blackcap only 5 have been heavier out of over 1,500 that have been weighed.  All the previous ones have been at Heysham on autumn passage.

Richard
Posted by Richard du Feu at 18:41 No comments:

The first whoosh netting attempt of the Autumn for Twite at Heysham Harbour this morning.  A few Twite have been present over the last week, together with Goldfinch and Linnets.

This morning's session saw 41 new + 1 retrap Goldfinch,  2 new + 1 retrap Linnet and 5 Twite captured.  Almost 50% of the Goldfinch were aged as still being 3J, notwithstanding the lateness of the season.

The colour combination in use for Twite on the left leg below is Red/Blue split colour over Pale Blue plain  (on the right leg BTO metal only).

We would ask any observers finding Twite in the area to look out for colour rings and, if possible, report an estimate of the ringed/unringed ratio of birds in the flock together with colour combinations if they can be seen. The split colours can be hard to read in the field but the plain colour itself indicates the ringing site (i.e. Pale Blue for Heysham,  Yellow for Duddon Estuary etc.) so reading this colour alone is very useful.

ajd
Posted by North Lancs Ringing Group at 15:54 No comments:

Coal Tis Prosper. But Where are all the Blue Tits?

Goldfinch also appear to have had a successful season with 71 ringed during the period. One feature is that many are still in juvenile plumage suggesting late broods.

However one of the re-trap Blue Tits turned up trumps it had been ringed seven years and 221 days previously at the same feeding station and breaks the record for our oldest Blue Tit by 101 days!
John
Posted by North Lancs Ringing Group at 19:39 No comments:

Reed Warblers Have an Average Season

Just worked out the results of our Reed Warbler RAS study at Leighton Moss RSPB Reserve. This is the 12th year of our study and proved to be one of our most difficult due to the wet weather this spring and summer and the resulting high water levels. In all we managed 50 visits but this is 14 down on 2011 and then on some visits we could not set the usual number of nets due to the high water levels.

Despite these problems we still caught 201 adults which is six higher than the 12 year average although 37 less than in 2011. Considering that July, usually the best month for catching adults, gave us the most weather related problems this suggests a good breeding population. The oldest bird re-trapped this year was in its ninth year.

Productivity as measured by juveniles caught (504) was 90 down on the 12 year average but again quite good considering the decline in ringing effort. Lets hope the weather improves next season.

A quick trip to the woods in Roeburndale yesterday for the first ringing session of the autumn turned up few birds, probably because there is still plenty of natural food (including plenty of midges) and the birds aren't hungry yet for artifical food.

But it did turn up a ringed Goldcrest complete with a very shiny ring. Fortunately, this didn't mean it had recently been caught on migration - instead it was a bird that had been ringed in the same wood last year (15th October).

There might be some readers who would be disappointed by this, but the essence of ringing at this site is to retrap birds that have been ringed here, in this wood, before. This is because one of the most important (some would say, THE most important) aims of ringing is for population monitoring. Data from ringing is fed to the British Trust for Ornithology where it joins other scientific data (such as Nest Records, census data and so on) as part of a scheme that is called Integrated Population Monitoring (see the BTO website for details). For the purposes of IPM, birds that are recaught where they are ringed are much more important than birds that wander off elsewhere.

Very few Goldcrest are ever recaught - small birds often present very low percentages of ringing recoveries - and this is the first Goldcrest that I have retrapped in this wood and thus, it was a 'real' rarity!

Paul
Posted by North Lancs Ringing Group at 14:40 No comments: 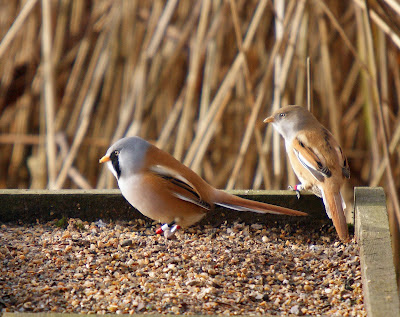 Posted by North Lancs Ringing Group at 20:03 No comments: