How Long Do Birds Live?

One of the most fascinating things about ringing over a long period is that you assemble data on how long birds live. I have always kept a file detailing the longevity records of the group. This time of year I search our data base to see if any of the birds we have re-trapped or have been recovered, have improved on the records we have.

I always check out Reed Warbler first for not only do we ring large numbers each year (980 this year), so improving the chances of getting a new record but also because among small passerines Reed Warblers are well known for being long lived. I was not disappointed for we re trapped one this year nine years and 314 days after ringing. This extends the groups record of the oldest Reed Warbler by just 21 days.

I then turn to another frequently ringed species Blue Tit (1910). The oldest this year was one re-trapped seven years and 326 days after ringing. Another record, 120 days longer than our previous oldest bird.

Great Tits are ringed in smaller numbers (920) but our previous record was 13 years and 339 days not only a record for the group but also for the whole BTO ringing scheme. This year's oldest was four years and 74 days so something of a come down.

Coal Tits (380) have been present in good numbers this year and the oldest at 6 Years and 314 days, beat our previous record by 24 days.

Paul in our last posting highlighted a Dunnock at five years 57 days. Very good, but well short of our oldest record of six years and 205 days.

The species we have ringed most of this year is Sand Martin at 2140 with 648 re traps. Our oldest bird was four years and 216 days but our all time record is five years and 355 days.

These are this year's high lights, remember though that except for the Dunnock which was found dead, all the others were re trapped so hopefully are still going strong. One final thought with our data base it took me ca 35 mins to check through all our re traps. In the days before computers with all paper records it would probably have taken me at least 35 hours to check and then I would probably not have been as accurate.

But the last word should go to the birds, think of that Reed Warbler making at least nine journeys back and forth between Leighton Moss and West Africa. Quite a feat for such a small bird weighing just 12 grams or so!
John
Posted by North Lancs Ringing Group at 16:09 No comments:

Dunno what you been up to?

We are told the prime value in ringing comes from the data that can be used in population modelling and much of the significant information that the BTO produce falls under the Integrated Population Modelling programme and thus retrap and recovery data are much appreciated by ringers, even if sometimes, such records lack the glamour of records of oddities - but at this season, most of us know that not all that glitters is gold.

Fitting this is a record of a Dunnock, caught as a juvenile in September 2006 in Hala and caught by a cat five years later in November 2011 in a garden less than 100 metres away. Interestingly, this bird had never been recaught in numerous ringing sessions since then. Short scale movement is the norm for this species (95% of recoveries are within 5km of the ringing site) but this does not mean that records ssuch as this are dull - as Ian Hartley writes in the Migration Atlas, "there are still unanswered questions about the species' local movements"!

Paul
Posted by North Lancs Ringing Group at 21:07 No comments: 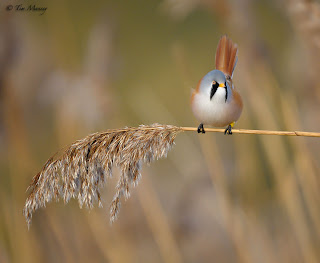 Many thanks to Tim Munsey for the photograph.
John
Posted by North Lancs Ringing Group at 16:50 No comments:

There appears to be a marked scarcity of Blue Tits this autumn and early winter. i have looked at two sites we work regularly.

At our woodland feeding station, of Teddy Heights near Arnside we have caught only 63 so far compared to 164 in the same period last year. Of these 46% are adults compared to 17% last year.

At Leighton Moss in the reed beds and willow scrub this years total to date is 323 compared with 594 last year. Adult percentage has gone from just 4.7 in 2010 to 25% this year.

These low numbers and high percentage of adult birds suggest that survival of young birds has been poor. Almost all our nest box sites had good productivity up to the fledging stage so any high mortality must have been after fledging.

Talking to other ringers from Nottingham, South Lancs, and Yorkshire at the BTO conference last weekend I got a similar story of low Numbers and high adult percentages. Also talking to other members of the Group and local garden bird feeders they are experiencing similar low numbers.
John
Posted by North Lancs Ringing Group at 17:21 1 comment:

The programme and booking form is now available for download.

The conference is being sponsored by Vine House Farm.
Posted by Richard du Feu at 19:11 No comments: