Chiffchaffs on the Up


One of the fascinating aspects of  bird study is observing and recording changes in bird populations. Since 1989 I have  censused the breeding populations of Willow Warbler and Chiffchaff on a woodland and scrub  section of Leighton Moss RSPB Reserve.Chiffchaff have seen  a marked rise in the population from just 1-2 pairs in the 1980’s increasing to 4-6 pairs in the  2000’s and to a peak of 18 pairs in 2014. By  contrast Willow Warblers have fluctuated but overall have remained reasonably stable throughout  with 26 to 35 in the 1990’s and the 2000’s and 27-30 over the past  five years.


We had concluded that the change in habitats   basically the maturing of the Hawthorn/ Ash scrub favoured the Chiffchaff and was the main reason for the recorded increase . However I thought it would be interesting to  look at the Groups  ringing statistics of these two closely related species to see what they reveal.

Figure 1 shows the annual ringing totals of new birds of each species from 1981 to 2015. It shows that Willow Warbler ringing totals have fluctuated quite widely, probably to some extent due to varying ringing effort which is mainly related to weather conditions, but the peaks have been similar throughout with peaks of 640 in1985 and 645 in 2014. By contrast although there has been some  small fluctuations in the Chiffchaff ringing totals the main trend has been upward especially recently. From a low of only 9 in 1981and 82 to a high of 437 in 2014 strongly suggesting an increasing population breeding in and migrating through our area.


Posted by North Lancs Ringing Group at 16:25 No comments:

Just received recovery details of a Firecrest that was ringed at Heysham on 14th September and found dead in the grill of a car at Elgin (Moray) 401 km N 115 days after ringing! The car had been driven that day between Wick and Elgin but the finder remembers striking a small bird as he approached Elgin. He has supplied us with a photo of the dead bird and it certainly looks fresh. So what an amazing recovery. Just a pity that it had to die.

Five other Firecrests have been ringed at Heysham since 1998. Three of these were in spring , of the three  caught in autumn this preset bird is the earliest by a month so had plenty of time to drift north before choosing to winter in Moray. An interesting example of a bird making an unexpected journey and shows the value of ringing. 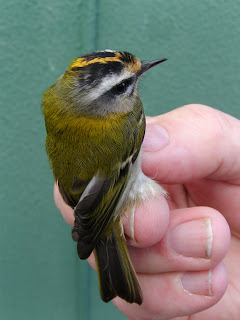 Looking  at the online ringing reports this is the 4th longest movement of a Firecrest in Britain. Interestingly the one making the longest  movement from Norfolk to Wick did so in a similar time frame to the present bird.
John
Posted by North Lancs Ringing Group at 19:35 No comments: