The first broods of flycatchers have started hatching. Seven yesterday in a box in Roeburndale looked to have hatched just that day - this would suggest an arrival at the end of April with a very rapid building of the nest and laying started at the start of May.

paul
Posted by North Lancs Ringing Group at 16:30 No comments: 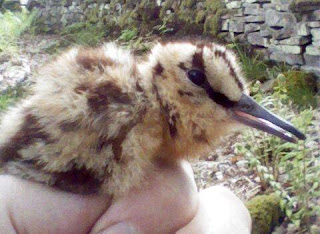 I make no apology for repeating the posting of this photo - it looks so good!

Good news and bad news from my visit to the boxes with Tony Moriaty last night. Robin nest predated at young stage. First brood of Great Tit ringed (9 out of 9) and a warning for nest box checkers: Tits with black heads hissing in a box might not be what they first appear - two Marsh Tit acting in an agitated manner next to a box where the pulli had been 'identified' as Great Tit turned out on closer inspection to be Marsh Tit - and were duly ringed. Other boxes appear to be doing well so far.

paul
Posted by North Lancs Ringing Group at 14:52 No comments:

The positive start to the season continues. My three sites in Roeburndale now have 23active Pied Flycatcher nests with 15 Great Tit, 22 Blue Tit (one nest predated since last week), 1 Redstart and 1 Robin. There are another 3 Pied Flycatcher, 10 Blue Tit and 2 Great Tit in Richard's boxes - I'm monitoring these whilst he is in America.

Robin has hatched and Great Tits are starting to do so (some days behind the box in my garden in Lancaster).

Highlight of the weekend for me was finding two Woodcock pulli and ringing them in Roeburndale.

Paul
Posted by North Lancs Ringing Group at 08:37 No comments:

Where Do Our Little Egrets Come From?

Little Egrets have been the success story of recent years. With only six records up to 1993 Numbers have built up since then and last autumn saw up to 100 roosting at either Leighton Moss or the Lune estuary Two recent recoveries of colour ringed birds reveals something of the source of these birds

The first was ringed as a nestling in Gwent South Wales in May 2009 and was first sighted at Leighton Moss on 16th August 2009 a distance of 291 kms in 80 days. This suggests that some at least of the late summer early autumn influx are birds of the year.

The other though shows that adult birds are also involved. It was ringed as a nestling in Kent on 11th May 2003 and reported at Leighton Moss on 9th October 2009.At over six years old it is the oldest Little Egret reported by the British Ringing Scheme ad still going strong.

Nest boxes - start of the season

Early indications are that this is a good season for birds using boxes in some of our schemes. Boxes in Roeburndale already have more nesting attempts than they had last year with increased numbers of Blue Tits despite the harsh winter weather. Pied Flycatcher numbers already appear to be at the same level as last year but it is early and there may be more to come.