With decent weather we caught 333 birds in three visits to our reed  bed sites at Leighton Moss RSPB Reserve. Bearded Tits our main study species started to feature again as the first brood complete their moult. Bearded Tits are one of those species where the juveniles moult their flight feathers and they become almost flightless during the moult but all 5 that we caught had all but completed their moult.  Two had been ringed as first brood nestlings  giving us precise data as to their age in relation to completion of the moult.

Warblers  though proved the most interesting. Our catches of Sedge Warbler have been low this year, on Saturday it looked as though they were picking up with a catch of 25 compared to 39 Reed Warblers, but Sundays catch produced only 2 compared with 35 Reed Warblers. One feature of Saturdays catch was the low weights with many under 10 grams suggesting they had migrated over night, probably from  Scotland.

Reed Warblers appear to be having a bumper season, we are just short  of the 1000 mark for the year. Despite ringing 450 juvs in July all but one of the 28 retraps we had this weekend were from August ringing, the exception was a bird ringed as a short  tailed IJ  on 21/7. this strongly suggests that all the first brood Reed Warblers along with most of the  adults have moved out. We have caught only  14 adults in August.

But the star of the show was Willow Warbler. If our catches are any thing to go by they also have had a bumper season. In the whole of the 2013 season we caught only 183 but to date this year we have already caught 307. Many of this weekends catch were  long winged birds suggesting a northern origin

A tail of two Knot

On a recent trip to the Wash as part of the Wash Wader Ringing Group's summer fieldwork activity a catch of Knot was made in Lincolnshire.  While the number of Knot retraps is always low due to the large numbers around and relatively small numbers ringed each year we did have around 1% of the catch as previously ringed on the Wash.  We also retrapped a bird originally ringed on the 14th February 1998 at Heysham, Lancashire.

This kind of movement is exactly what we would expect from a wintering Knot at Heysham.  In autumn flocks of many 10s of thousand or even 100,000 form on the Wash where many moult before dispersing to estuaries around the UK and Northern Europe.

While looking at the excellent BTO online recoveries page to see how many have been recorded making this movement before (90), I noticed a rather surprising movement to the Canary Islands.  On further investigation I found this blog which even has photographic evidence of this unusual movement.  Interestingly this bird to the Canary Islands was caught in the same catch at Heysham back in 1998.

The Canary Islands, although a long way away, is not a surprising location for Knot to winter.  What is surprising is that all knot in Morecambe Bay in winter are of the Islandica race which breed in Greenland and Canada then winter in Northern Europe with a few reaching as far south as Portugal. Normally I would have expected a Knot on the Canary Islands to be from the nominate Canutus race however mid August is awfully early for them to arrive on their wintering grounds, particularly as this was still in summer plumage.  How this bird reached the Canaries is a mystery however as they are long distance migrants that do cross large expanses of ocean it is possible a storm picked it up somewhere further north, alternatively it became horribly lost.
Posted by Richard du Feu at 19:11 No comments:

I blogged before about the small numbers of Sedge Warbles we are catching this year. August is usually the best month for both Sedge and Reed Warblers but this August the weather has done us no favors. However on the six mornings of suitable weather this month we have only caught  33 Sedge Warblers  compared to 160 Reed Warblers. Usually we would expect to catch  in a ratio of 2 to 1 in favour of Reed Warblers.

In our cath on Augut 15h at Leighton Moss RSPB we  caught a female and a juvenile from a small party of Bearded Tits- the others went past the end of the nets. The Juvenile had a dark  iris suggesting that it was recently fledged and was still in juvenile plumage with no sign of moult. The adult female had just started to moult with 8 old feathers suggesting that it had  a brood  that had fledged  probably in early August. Bearded Tits can have three broods per season and on occasions we have caught birds still in juvenile plumage as late as Oct 6th.
John
Posted by North Lancs Ringing Group at 17:41 1 comment: 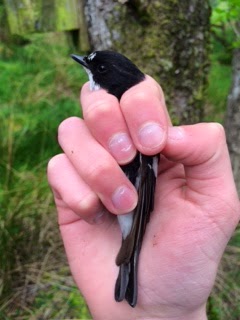 Posted by North Lancs Ringing Group at 18:11 No comments: