Where Have All the Sedge Warblers Gone

This season is turning into the most difficult we have experienced in the 16 years we have been doing our reed bed ringing at Leighton Moss. We usually rotate our ringing round four main sites, but this year due to the poor weather and the resulting high water levels we have only been able to make 12 ringing visits compared to an average of 24 in previous years. Allowing for this fall in activity Sedge Warblers are well down with 39 ringed this July a 37% decline on 2011. Reed warblers with 261 ringed are also down by 13%. By contrast Willow Warblers with 82 ringed are similar to 2011. Will be interesting to see what August brings- it may be that the season is later this year, in fact the last two days of July were our best day for Sedge Warblers. We also caught a Dutch ringed adult Sedge Warbler presumably ringed on passage in the Netherlands. John
Posted by North Lancs Ringing Group at 19:02 1 comment:

In a year when many species have had a rather difficult season, due to the cold wet spring, it is great to be able to report on one species that to fledging at least has had a very successful season. Our RAS in the Lune Valley covers nest box schemes in 11 mainly upland oak woods. The population this year was 87 pairs, just five down on the record population of 92 in 2011. Of these 72 or 83% successfully produced year making it one of the best years since our study began. We ringed 427 nestlings with the average brood size at ringing being 5.8. We also caught 73 females and 38 males. Two of the males were proved to be feeding at two adjacent nest boxes. Many of these had been ringed in our nest boxes in previous years. Our oldest bird was V469347, ringed as an adult female in May 2007 so it is six years old at least. It has bred successfully every year in the same wood for the past six years although it has used four different nest boxes, all within ca 100 m of each other. It also has had different males each year. Almost all returning adults breed in the same wood in successive years although this year we had two move four km. A few of the birds ringed as nestlings return to breed in their natal wood, but most move just a short distance to another wood. Some though move further as shown by five adults we caught this year, these had been ringed as nestlings in Cumbria (2)Northumberland, Durham and Derbyshire. John
Posted by North Lancs Ringing Group at 08:52 No comments:

The poor weather with heavy rain and wind and the resulting high water levels has seriously curtailed our ringing efforts at Leighton Moss. Last year in the first half of July we managed 11 ringing sessions , this year we have managed only five. Average catch last year was 35- this year only 18. It is however early days at least for Reed Warblers although there appears to be fewer young around so far this year. Reed Warblers and Bearded Tits are our main study with an RAS done on both. Today we passed the 100 mark for adult Reed Warblers - by this time last year we had caught 137 and ended up with 236 for the year. Of these ca 50% are already ringed. To date we have only ringed 12 juvenile Bearded Tits about half last year total and there appears to be a higher breeding population this year. Todays star bird though was a juvenile Cetti's Warbler giving the first positive proof that this expanding species has finally bred successfully at Leighton Moss. For the past three years we have caught up to five birds in September/October but although they have wintered and males have sung in March they appeared to leave after that. This year possibly four males have been singing right through the spring. Will be interesting to see how many more we catch. John
Posted by North Lancs Ringing Group at 18:29 No comments:

The record high water levels at Leighton Moss continue to hamper our ringing but we did manage to erect three nets this morning at a site where we usually have at least double that number. Some more juvenile Reed Warblers were caught and eventually we caught eight juvenile Bearded Tits. From their eye colour all were from early broods and this was confirmed by the fact that four had been ringed in the nest boxes in late April. Despite this welcome catch making 12 for the year, 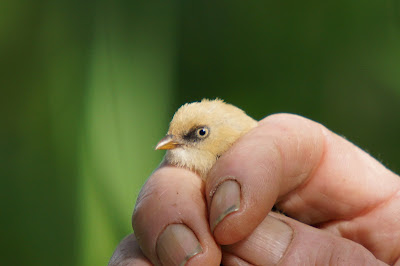 I still feel that breeding success has been poor, usually by this time we would have caught 40- 50 young although this years difficult conditions mean we have not been able to put in as much effort. John
Posted by North Lancs Ringing Group at 18:04 No comments:

The recent torrential rain has raised the water levels at Leighton Moss to a record summer high and several of our ringing sites are inaccessible. We managed a short session this morning with fewer nets than usual and a later start due having to spend twenty minutes bailing out the boat. We caught our first juvenile Sedge Warbler along with a few Juv.Reed warblers. But the only Bearded Tit was an adult female and we did not hear any other birds in what is usually one of our best sites for juvenile Bearded Tits. I rather fear that the rise in the water tables last month had flooded out the majority of the nests. Reed Warblers also appeared scarce with none of the usual calling from the reeds. The bird of the morning though was Reed Warbler R510202 it was ringed as a juvenile in August 2003 so it is nine years old. This is the third oldest Reed Warbler in our study only being beaten by two ten year old birds. Interestingly it had not been re-trapped since 2009. Reed Warblers are well known for surviving well compared with other warblers. Of the two other species we ring in good numbers, Sedge and Willow Warblers, our record stands at five years for both species. John
Posted by North Lancs Ringing Group at 19:19 No comments: