Given that 500 have been ringed there this autumn and several of our birds have been seen there over the last few years, it was no surprise to find one of their birds under the whoosh net at Heysham north harbour wall on 24th October. Given the good arrival weather (and poor subsequent forecast), it was decided to also catch Twite on 25th October and this produced just the one retrap from the previous day.........the Machrihanish bird! It or another was then seen at nearby Walney two-three days later and there have been no further signs of any Machrihanish birds at Heysham by 2nd November, but quite a bit of turnover with e.g. 6/10 in the gale this morning (2nd) being unringed. Based on previous years, the next weather window should see a big arrival and hopefully there will be a suitable morning later this week, unfortunately coinciding with potentially large numbers of early-morning anglers (it only needs one to have a dog.....)

The Machrihanish birds have green/white colour rings on BOTH legs. Therefore please take careful note of any birds you see with colour rings on both legs - they may either, for example, be from the Mull of Kintyre or birds ringed as pulli at Pennine sites

It does seem from our experience this autumn that having someone wandering around the mound/sandworks considerably 'speeds up' the process of getting the birds around the feeder and under the net
Posted by North Lancs Ringing Group at 11:48 No comments:

The ringing this morning of three new Bearded Tits makes 101 for the year, only one to go to equal last years record.

We consider that all of these are this years birds partly because 99% of our adult birds are already ringed (This year we have caught 70 adults and only one was un-ringed). Also using moult and eye colour we can allocate most birds to early or late broods. Of the three caught this morning two had almost completed their moult and had pale eyes. Our data suggests that they fledged probably around mid August. It has been a good year for late broods and there are probably quite a few birds yet to ring.

Besides the Bearded Tits we also caught the third Cetti's Warbler of the autumn. Cetti's are an increasing winter visitors to Leighton Moss. They have yet to breed although one of the birds caught this autumn was first ringed in September 2009.At least two other birds were singing this morning elsewhere on the Moss

They're Back - Twite That Is

In the last couple of days the first returning passage Twite have arrived at Heysham Harbour. Having, by chance, previously decided to set out the whoosh net and fix the hole positions etc. this afternoon, I left the net set for a while and managed to catch 3 Twite and 8 Linnets.

A number of Heysham birds have previously been seen at Machrihanish Bird Obs. and during this autumn the staff there have been catching and colour ringing Twite themselves (they have ringed more than 400 so far, a splendid effort!).

It seems logical that we should see some of their birds at Heysham during the passage and winter periods, although they are hoping that some will also be found in Ireland. We should all keep alert for colour ringed Twite in the area. Each bird is normally ringed with a single colour plus a split double colour ring on one leg and a BTO metal ring on the other - the single colour represents the ringing site and the split colour the period of ringing. Heysham's site colour is Pale Blue so any other colour will be particularly interesting. The Machrihanish team have so far used the slightly different combination of a split Green/White ring on each leg, with the BTO metal ring fitted above the colour ring on the left leg. 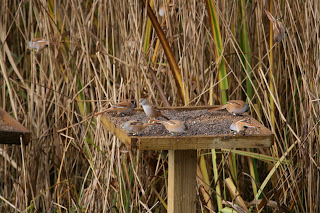 The Bearded Tit grit trays at Leighton Moss are now in full swing. To date we have had 225 sightings reported of our colour ringed birds. mainly be Keith Kellet and Alan Gallagher and family.

The pattern of use has been very marked this year with adults coming in early September, followed by the first brood in early October and now the latter broods are just starting to appear. In total to date we have identified 72 individuals, 40 adult birds and 32 birds bred this year.They are all in superb plumage.

The birds regularly appear on the grit tray in pairs.Bearded Tits regularly form pairs as juveniles and our ringing and sightings show that these early pairs can, if they survive, stop together for life. We recorded one pair formed as juveniles which were caught or sighted together throughout almost three years.

Our ringing this year has been most interesting, we have caught or sighted 43 adult males but just 25 adult females and to date we have caught 94 juveniles.

John
Posted by North Lancs Ringing Group at 17:24 No comments:

The catching this morning of a Sedge Warbler which weighed in at 17.5 grams set me looking back through our records. Sedge Warblers usually weigh between 10 to 11 grams so this bird had put on weight mainly in the form of fat amounting to an increase of approximately 75% of its body weight. Fat is the fuel that the bird will use on its nocturnal migration towards its wintering area in Africa.

Over the past ten years we have only caught eight Sedge Warblers in October of these 50% show signs of accumulating fat. But today's bird was the heaviest. It is not however the heaviest we have recorded, this is one trapped on 24/9/04 which weighed 18.1 grams. How long does it take a bird to accumulate this amount of fat? We have a good pointer in a bird ringed on 24/9 weighing 12.9 grams and 7 days later it was re-trapped and weighed 16.5 grams.

However Ian Newton's superb book on Bird Migration gives some figures for Sedge Warblers migrating through Kenya in spring. The maximum rate recorded was a bird which went from 12.2 grams to 19.6 grams in just three days another bird more than doubled its weight in 17 days.

We also caught two Reed Warblers today one was a normal weight of 10.6 grams the other weighed 13.1 grams. Looking back through our records the heaviest Reed Warbler I could find was 14.8 grams.

John
Posted by North Lancs Ringing Group at 17:51 No comments: