Paid our first post breeding season visit to Jerry and Barbara's woodland edge garden. With just two short nets we caught 50 birds. We expected to catch young tits and of  25 tits caught only one was an adult. We also caught 3 young Nuthatch which is great for our colour ringing study of this species.

The big surprise though was Bullfinch, we caught 11, especially when you consider that  we only caught seven over the  previous 12 months! Interestingly only one was a juvenile, the others were adults including four we had ringed before. One of these had been ringed as a juvenile almost three years previously. Does this mean that Bullfinch have had a poor breeding season, or that juveniles do not visit feeders at this time of year? Future visits may  throw light on the situation.
John 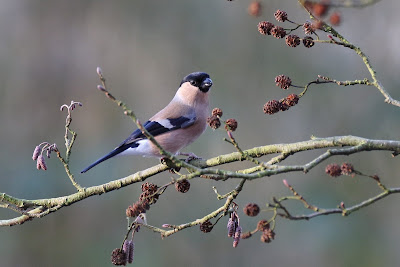 Posted by North Lancs Ringing Group at 13:57 No comments:

Now got the data for about half our RAS study of Pied Flycatchers in the Lune valley woodlands.So far it has been a good season although there has been three reports of nest box predation by either weasels or stoats.

So far in total we have ringed or retrapped 369 birds  made up of 33 males, 60 females and  286 nestlings. The later have survived well in the excellent June weather, the number of caterpillars on the Oak especially appears to be high, and the numbers of insects especially midges is amazing!

A quick analysis of the retrap data shows that although 13 of the birds ringed as nestlings in previous years and retrapped breeding this year returned to their native wood, but 27 moved to other woods within the Lune valley. But  of adult birds 13 returned to the wood they breed in last year and only  two changed woods. There were several examples of birds returning to the same box to breed.

Our oldest bird  is in its seventh year and was originally ringed as an adult. This female bred in the same wood for three years,was missed the next year, then moved 4 km to another wood and this year moved 3km. We have two others in their fifth year.
John

Posted by North Lancs Ringing Group at 09:56 No comments: