Today there was at least 2300 Godwits on the Eric Morecambe Complex on the edge  of Morecambe Bay. But with high spring tides most were on the flooded salt marsh. During the first half of March we have sighted  five colour ringed birds.  One from the Montrose Basin, two from the Humber, one from Kent and one from Iceland.

The Icelandic one is the oldest and the most interesting with 102 sightings since it was ringed  as an adult male in Iceland in July 2011 . It has wintered on the Dee estuary every year since. In April 2013 it was sighted in North Holland. From  2014 it has established  a pattern of calling in at Morecambe Bay on the Eric Morecambe Complex in late March and April. This year though it was seen on 23rd February its earliest record and is still there gradually getting its summer plumage. Surprisingly it has never been seen again in Iceland.

Over the years we have recorded ca 70 Icelandic ringed Godwits in Morecambe Bay mainly in spring but at least 17 have been recorded in autumn. Some have  wintered as far south as SW France, others in Hampshire and Se Ireland, but the bulk winter on the Dee 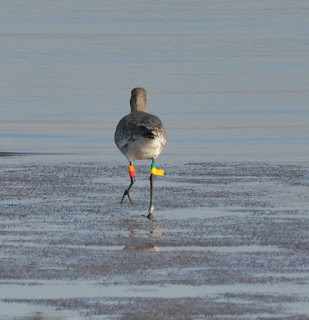 Posted by North Lancs Ringing Group at 17:10 No comments: