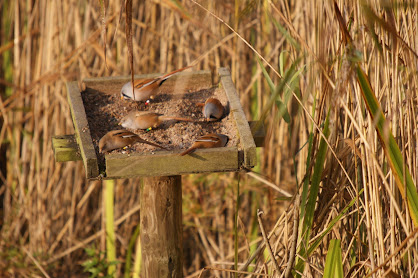 Posted by North Lancs Ringing Group at 14:06 No comments:

A difficult year because of the lockdowns, but the group managed to ring 6006 new birds just over 3000 down on 2019. We didnt do our two RAS 's for Bearded Tits and Reed Warbler at Leighton Moss, but we did our Sand Martin and Pied Flycatcher studies in the Lune valley. The Pied Flycatcher study was a real highlight with a peak of 120 occupied nest boxes and despite not ringing in two woods we ringed 97 new adults, 812 nestlings and had 150 retraps. Other good numbers ringed were 561 Meadow Pipits 153 Redwing, 126 Dippers and 99 Grey Wagtails.

Recovery highlights were our furthest north Grey Wagtail in Fife and furthest south into Dorset. Despite ringing over 7000 Meadow Pipits over the years we have had  very few recoveries but this year we had  one from Cunbria just six days after ringing and one wintering in Devon.

Pied Flycatchers controls included no fewer than four ringed as nestlings in Wales and found breeding in the Lune Valley. Are they moving north due to climate change? Blackcaps were reported in spring from the Netherlands and on their  way south from Sussex and Hertforshire. A Goldfich ringed while wintering in our area was caught in early autumn in Aberdeenshire.

Returns from colour ringing have been exceptionally good this autumn.

About 30 colour ringed Knot have been seen at the large roost at Heysham. The value of colour ringing is that thanks to an international   group of dedicated recorders we can monitor the movements and survival of the species, a bird can be seen up to 20 times in four different countries. This year we have had five reports from Norway and 20 reports from Iceland all in May as they pause on their migration to the breeding grounds in Greenland and Artic Canada. On their return they move to the Waddensea in The Netherlands and The Wash to moult from late July to early October before moving to Morecambe Bay for winter with a few moving on to Ireland.

Other species with colour ring sightings included Oystercatchers from Iceland and Norway, Black-headed Gulls from Poland, Norway and Germany. Mediterranean Gulls from Poland, Germany, Belgium and The Netherlands. All passing through or wintering in our area.

Posted by North Lancs Ringing Group at 11:36 No comments: