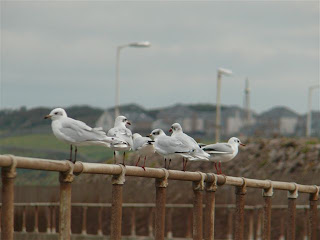 An above the knee metal ring, especially with the "Praha" & "EX" part of the address/ring number reduced in size, is a bit of a challenge. This bird was first seen on the outfalls and considered a non-starter. However, unlike most juveniles, which move on at the end of August, this bird stayed and discovered the lucrative scraps along the north harbour wall. It became a 'Bread Med' and the ring number fairly easy to read.

Note the consistent spring departure dates once it was 2nd S/Ad.
Jon Barber's pic from the Heysham Obs archive of a group of Meds & one BH Gull on the north harbour wall - the bird in question is the only adult! Thanks for this Jon.
Posted by North Lancs Ringing Group at 10:22