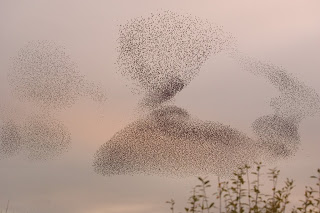 The recent spectacular increase in Starlings roosting at Leighton Moss suggests a mass arrival of continental birds. I checked the ringing recoveries for Starlings for our area ringed in winter and recovered in the breeding season. They have been reported from the following countries-
Russia 8 Belorussia 2 Estonia 6 Latvia 5 Lithuania 2 Finland 3 Poland 1
Sweden 10 Norway 7 Denmark 10 Germany 4 Netherlands 5 Belgium 1

A total of just over 9800 were ringed to produce these results. They were either ringed in gardens, when feeding, or in larger numbers at roosts near Garstang, Kirkby Lonsdale or Williamson's Park Lancaster. They either roosted in evergreen bushes or in pine plantations. We caught them in the later areas by crawling under the bushes until we found a gap then standing up and literally picking the birds off the branches. Quite an exciting evening but not for those who like to stay clean! These were mainly ringed in the 1960's and 70's. Has the migratory pattern changed since then? The recent arrival suggests that we are still getting a large number of birds wintering here.
Posted by North Lancs Ringing Group at 15:30