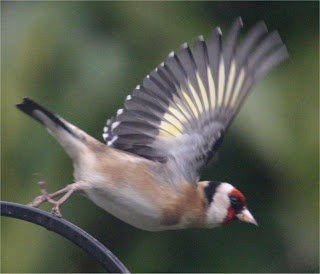 Many garden bird watchers have reported a marked increase in Goldfinches coming to their feeders over the past few years. Usually they report them in small numbers with anything over 5 together being unusual.

This past year has been exceptional. To give you some idea as to how many may be visiting your garden. Andrew Cadman in his small garden in Over Kellet has ringed just over 150 this year a hundred of these this autumn. The most Andrew has seen at once in his garden is 5.

From Andrew's ringing we are beginning to find out a little about the movements of this increasing bird. An April ringed bird was found a month later on the Island of Islay off the West Scottish coast. While another ringed in November in Nottigham was found in Over Kellet almost exactlly a year later.
Photo taken from LDBWS site & by Steph Sims. Thanks for this.
Posted by North Lancs Ringing Group at 13:48