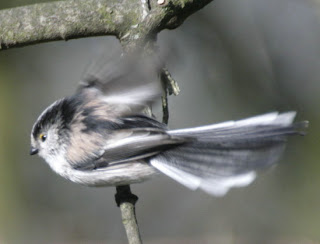 Anyone own up to Reed Bunting T939855 - caught at Middleton Industrial Estate (part of Heysham Obs) this morning?

Yet more unringed Long-tailed Tits caught this morning (76 for the autumn & it could have been a lot more with specific targeting). Long-tailed Tits nested successfully during the decent weather in earlyish spring, in contrast to many species whose ringing totals at Heysham are well below average e.g. Wren, Dunnock, Robin. There have been some interesting Long-tailed Tit movements from the passage flocks caught at Heysham, with many behaving in 'irruptive' fashion, notably two re-caught to the north-east of Perth in the same autumn!
Chris Batty has ringed over 100 this autumn at a seafront site at Knott End - all flocks heading S/W with no retraps

"........Also just over the North Sea, we've heard of very big movements of tits, with 12,650 Blue Tits recorded at Falsterbo on one day! Also moving in numbers are Long-tailed Tits, with counts of over 100 at several sites on the British coast, though their origins are largely unknown. These birds are moving though, and at Theddlethorpe in Lincolnshire 131 were ringed in the middle week of the month. Further south, five of these birds were then caught at Gibraltar Point Bird Observatory, where 186 have been ringed this autumn. It's not just along the east coast either, as we also heard of very large numbers arriving at Bardsey Bird Observatory, Gwynedd, at the end of the month."
and more evidence of unusual movement from another Irish Sea site:
"Seven were at Copeland (Island) Bird Observatory on 9th October (five of them were ringed). The last CBO record of this species was in 1961."
Photo from LDBWS photo archive & by John Bateman. Thanks for this.
Posted by North Lancs Ringing Group at 13:16