Water Rails on the Move 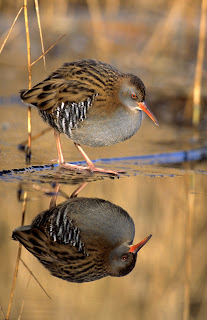 The recent spate of excellent sightings along the path edges at Leighton Moss reminded me of the two outstanding recoveries of this species from our area. The most I have ever seen a Water Rail fly is about 50 metres across the arm of a pool. Then the flight looks weak with the legs trailing.I have also seen them swim across dykes rather than take flight. You would think that a bird which spends almost all its life ferreting around at the bottom of a reed bed would not be capable of sustained flight. Not a bit of it.

A First winter bird ringed at Heysham Nature Reserve in November 1990, and retrapped during the winter 1990/1, was found dead the following June at 55 48 N 28 0 E near Minsk in Bylorussia a distance of almost 2500 kms. Another ringed in North Holland in October 1997 was found dying at Leighton Moss almost 4 and a half years later.

So a bird which flies only rarely for much of the year can take to sustained flight at migration times. In human terms it rather like a runner spending all his time in the Pub and then going straight out and winning a marathon!

John Wilson Thanks to David Mower for the Photo.
Posted by North Lancs Ringing Group at 16:31

Interesting article John.
It has been found that rail species with flight tend to easily evolve reduced flight, then flightlessness when on islands without predators.
Two factors lead to this selection. Flight muscles are heavy (about 25 percent of the bird's weight), and expensive in terms of energy. Young birds from these islands have no need to disperse far.
Due to their relatively weak flight, rails undergoing long-distance migration often get blown off course.