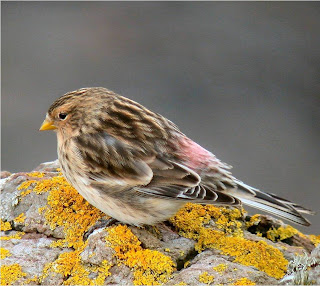 A metal-only ringed Twite was trapped at Heysham north harbour wall this morning. The BTO were contacted as a public relations exercise so that the harbour people, who kindly allowed access to the ringing site despite a major dredger-recovery operation, could be informed of the details. Thanks to Jez for accessing the BTO computer:

Ringed: Walberswick, Suffolk on 23/12/06 as a 1st calendar year female

This raises some interesting questions. The Suffolk coast is the "normal destination" for a lot of the Pennine-ringed Twite, with the nearest ringing station to here being Cant Clough, near Burnley. Was this a young Scottish bird which located some Pennine birds on its first autumn migration and ended up wintering with them? Is it now an older and wiser adult which has migrated with other inner Hebridean Twite to the "usual winter haunts" along the Lancashire (north of the Wyre) & Cumbrian coasts? Or is it the other way round - a Pennine bird which migrated "correctly" in its first autumn but has ended up at Heysham at a mid-stage of the Twite autumn migration (they are a late October-mid November migrant here)? Will it therefore reorientate to the Suffolk or similar coast, or will it stay with the Scottish birds? There have been a few known examples of Pennine-ringed birds ending up with the coastal Lancashire/Cumbrian flocks but the vast majority of these have been from the south Ribble shore, although there has been at least one Pennine-ringed bird seen as far north-west as the Duddon. There have also been two sightings of Heysham-ringed birds (of unknown origin) on the Lincolnshire coast in the winter following late October/early November ringing.

The relationship between Pennine and inner Hebridean Twite is therefore not as simple as was first thought in the initial two years of the ringing programme. The 'complications' started when ringing commenced on the south Ribble where birds of Pennine origin seem to be in the majority.

The excellent ringing effort by Alan this morning also discovered that there were TWO with the Duddon (Askam) yellow site ring and they were duly trapped and specifically identified. They were ringed either last Thursday or during the previous week. 52 new birds, 11 retraps, 2 Duddon-ringed and one Walberswick-ringed birds were caught [plus half a dozen Linnet]. The low percentage of retraps fits in with field observations made yesterday and was therefore not due to a net-shyness bias
13th November 2008
Todays sightings suggested two flocks, a more resident flock comprising 20-25 birds with the vast majority ringed plus a flock which might be tidally related i.e. appear when Ocean Edge saltmarsh covered. 77 seen, at least 16 unringed, plus a Duddon bird ringed this autumn (probably one of the two already trapped) and Duddon-ringed bird from autumn 2006 (the first time this has been seen)
Posted by North Lancs Ringing Group at 11:23