A recent batch of recoveries included several interesting ones. Quick movements are often interesting  and there were two in this batch. A Goldcrest ringed at Heysham on October 1st was caught 12 days later in Hampshire a movement of 354 km SSE. It was one of 90 ringed at Heysham this autumn.

A Goldfinch ringed on the Isle Of Man on  October 16th was caught at Heysham 3 days later having moved 98 km. We have had one previous  Isle of Man ringed bird found wintering in our area. Other  past Goldfinch recoveries show a marked SE movement with winter recoveries in  Sussex, Berkshire, Nottingham and Northants.

Sand Martin recoveries included a first, a bird ringed as a nestling. This bird was ringed  in an artificial colony  near Lockerbie (Dumfries & Galloway) by the North Solway RG on June 22nd and caught 65 days later at  Middleton , a movement of 129km.  This is our 10th Scottish recovery. 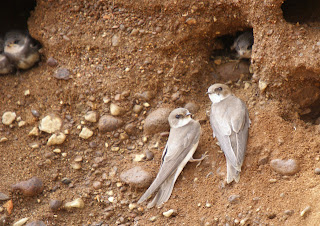 The other four were from areas where we have had many previous recoveries with two from Western France bringing our total French recoveries to 38. A Sussex recovery  was the 124th from that county and one in Kent was the 14th.

Other recoveries included a Sedge Warbler in France and a Lesser Redpoll from  Worcestershire . Finally we heard that the Cetti's Warbler that was ringed at Leighton  on 13th March 2010 and caught  390 km  away at Farlington Marsh near Portsmouth on 2th April 2011 was still  at Farlington in  October 2011 and January and February 2012. 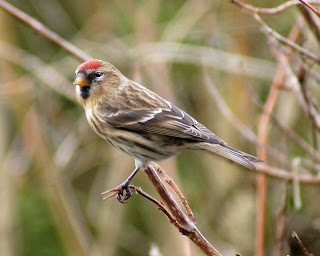 Thanks to Alan Gallagher for the photos.
John