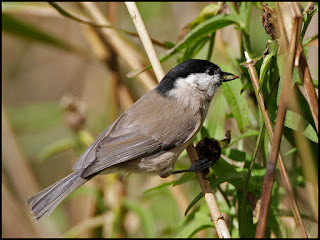 Marsh Tits are very much a feature of the Arnside/Silverdale woodlands, well distributed and regular visitors in small numbers to my woodland feeding station near Arnside where I have been ringing for the past 14 years, in that time I have ringed  101 Marsh Tits. Many are re-trapped, and up to this morning the oldest bird was five years and 35 days. But this morning I re-trapped T262102 seven years and 349 days after ringing on 19 December 2004. The interesting thing is that this was the first time it had been re-trapped in the eight years. The only other Marsh Tit caught today was only ringed in September but has already been re-trapped four times since then. Marsh Tits are very local and sedentary and quite  territorial  so the older bird has probably spent its time in another part of the wood but may have been driven to my feeding station by todays cold weather. This is a group longevity record for this species  but the oldest British ringed Marsh Tit was ten years and 57 days. Still ours is still going strong!