We've received a batch of wader recoveries recently which cover birds caught at Heysham.  Only two species were in the batch which is unsurprising since we have only caught two species on the Lancashire side of the bay for many years.

Firstly there is a map of Knot recoveries.  The blue blob is the ringing site, red markers where they have been recovered (2 to Iceland, 4 to Snettisham and 1 to Wainfleet).  Finally the two green markers are for one bird which was ringed at Heysham in 2004, caught and colour ringed in Northern Norway and then resighted on the Waddensea this summer.

The Icelandic and Norwegian recoveries highly the two migration routes to the breeding grounds in Greenland and Canada of the Icelandica race of Knot. 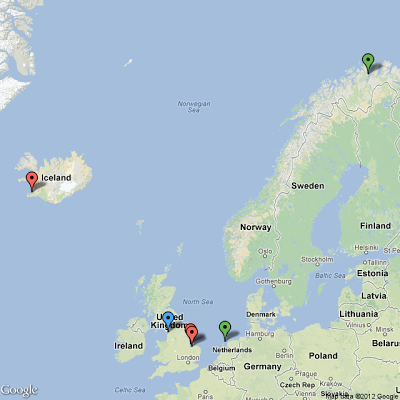 The second species with recoveries is Oystercatcher.  The red markers are where birds ringed at Heysham have been recovered, the yellow markers where ones we have caught were originally ringed. These are pretty much what we would expect for birds wintering on the West cost breeding in Iceland, Faroes, Orkney and Shetland. 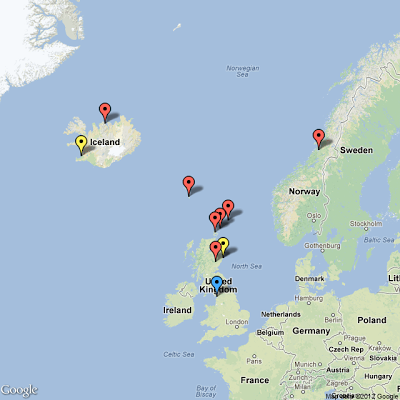 Yesterday I went to Fleetwood to try and find a Sanderling with a blue flag that was seen there a few weeks ago.  I failed however did find two birds originally ringed in Greenland.  With Sanderling it is always worth looking for colour rings and many have very interesting life histories.