The gritting season at Leighton Moss RSPB Reserve appears to be over for this year and I have just finished analyzing the 303 sightings of colour ringed birds  that we have recorded between September 29th and November 28th. In total 40 different birds were recorded gritting this year. Of these 29 were adult birds and 11 birds of the year, the latter a reflection of the poor breeding success this year due to the very wet  weather and resulting high water levels. 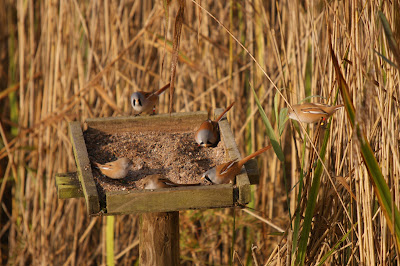 Like previous years there was considerable differences in the number of days that birds visited the trays. In total 35% were recorded on 1-3 days only. But the record  this year was  twenty two days with another bird close at 21 days. Both these birds visited regularly early in the period then disappeared only to return towards the end of the season with another sustained bout of gritting.

Despite the large numbers of birders visiting the reserve there was only one record of Bearded Tits gritting on the reserve paths. This was on October 29th when nine birds, all birds of the year, were gritting on the public causeway. Of the seven colour ringed, six were seen on the grit trays subsequently.

This year we attempted to record the time birds spent gritting. In October it was 9 minutes and in  November 11.6 minutes. If one or two birds were present they gritted without disturbance, but if more were present there was considerable chasing and birds then stopped longer in the area of the trays. The largest number recorded at once around the trays was 13.

Bearded Tits appear to remain in pairs throughout  the year and also form pairs a few weeks after fledging. Of the 29 adult birds  seen on the trays we recorded 12 pairs which visited together on at least three occasions. Included in these were two pairs that bred successfully together in spring and they were seen on eight and 13 times together on the trays.

Many thanks to those who helped in recording sightings especially Keith Kellet, the Gallagher family, Andrew Cadman, Pat Bowskill and Ken Harrison. 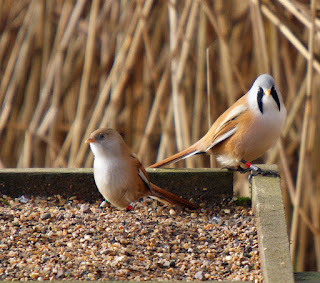 Bearing in mind there were records of irruptive behaviour, did the sightings point towards any possibility of individuals having left?

e.g. Was there a cluster of (colour-ringed) birds seen together early in the grtting season which were never seen again - obviously the strongest circumstantial evidence for departure

Would be really good to gather together all the evidence for irruptive behaviour and whether the birds were in one of these observed categories: