A careful count on a morning visit  yesterday to one of our main Pied Flycatcher RAS woods, gave  a total of 19 males but only 1 female. The wood resounded to Pied Fly song and many were visiting nest  boxes although we found only two nests in the early stages. Last year we had 14 pairs using the nest boxes in this wood so the omens look good for this year. We also had a pair of Redstarts around the  box they used last year and for the first time in four years a singing Wood Warbler, while a Cuckoo called at the edge of the wood. A great morning!

Tits though were rather sparse. we had only four nests with eggs, on the same date last year we had nine but this years cold spring appears to have delayed laying both here and at our other nest box schemes.

Richard has done a great job searching for colour ringed Black-tailed Godwits in a flock of around 1750 which frequent the Leighton Moss RSPB reserve area on spring passage. He has sighted at least eight originally ringed on their breeding area in Iceland, and one from the wintering area in France. The information amassed is amazing, one of the colour ringed birds has ben sighted 111 times over six years and has visited four of the major estuaries in Britain. This year  most departed in late  April /early May. Two birds have already been reported from Iceland, both were last sighted at Leighton on 29 April and seen on the breeding areas in Iceland 4 and 6 days later. 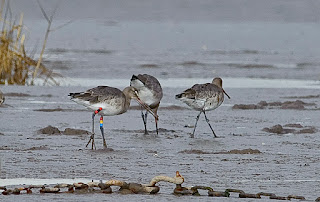