A Morning with Bearded Tits

Spent an interesting morning using new technology to  watch a pair of Bearded Tits feeding their brood of six young in one of my nest boxes at Leighton Moss RSPB Reserve. This is part of my 17 year study of this species, the results of which have just been published in Ringing &Migration. To get the colour ring combinations of the adults I used to move a hide near to the nest over 3 days or so, quite a task when you had10-15 nests. Recently we have used motion activated cameras but yesterday we positioned a small camera  to give a good view of the entrance and  we could watch what went on on a tablet siting in deck chairs along a nearby ride! With the zoom we could identify most of the prey the adults were bringing in, mainly blue tailed damsel flies. They were feeding ca ever 4-5 mins. and quite unusually the pair came in together almost all the time. We  easily got the colour ring combinations and discovered that they were the same pair which had already reared a brood of five in a nest box 110 metres  away. The young from this nest had fledged on 21st of April and the first egg of this second brood was laid just 11 days later.
John 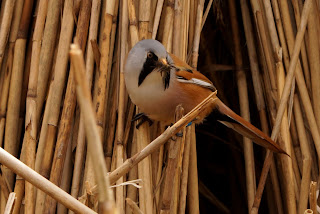