Finches on the Move

The spring move north of Goldfinch, Siskin and Lesser Redpoll is well underway,although it may be delayed somewhat by the unseasonably cold spring weather. Certainly all three have been coming to garden bird feeders, especially Mark's and Dave's in the south east of our area. In total we have caught around 3-400 of each species so  far this year.

This has produced a nice flush of recoveries adding further to our knowledge of these species wintering and breeding areas and their time of movement.The quickest mover was a Lesser Redpoll ringed in Powys on April10th and caught 6 days later by Mark. It is only our second Redpoll from Wales. Birds which had wintered in Surrey and Berkshire brings our total from   SE England  and the South Midlands to 36 showing this to be the main wintering  area for our passage birds. 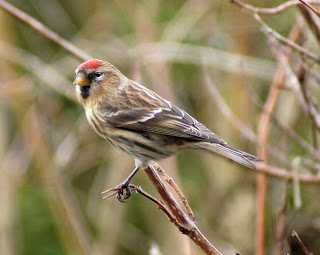 A Siskin recaptured at Shebster (Highland) on the April 8th had been ringed by Dave  41 days previously and brings our total of Siskin from NE Scotland to 22 showing this to be the main breeding area of our birds for this early breeder.

We have much less information about Goldfinch which have been especially abundant at garden feeders this late winter/spring. Recoveries in spring in Argyll and Galloway bring our reports from these areas to the second and third only. The one recaptured in Galloway on April 2nd had been ringed by Dave just 10 days previously. But Marks retrap of a French ringed Goldfinch in late April breaks new ground as our first foreign report of this species.