Another Nest Box Scheme has a good year 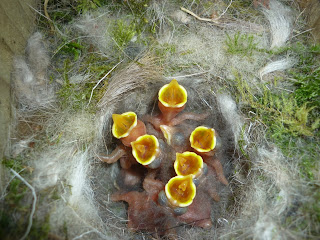 Following on from my previous report showing good productivity from my nest box scheme near Kirkby Lonsdale and also Paul's report on Roeburndale my Leighton Moss scheme has also had a successful season. Results as follows-

Of 13 Great Tit nests 11 were successful.
Eleven Blue tits had only one failure.
Single nests of Coal Tit, Nuthatch and Tawny Owl were all successful.

Yesterday I visited the boxes of a small scheme in Barbondale. Here six Pied Flycatchers have nested, just one failed but the other five were all feeding young.
Many thanks to Tony and June Moriarty for checking the bulk of the Leighton Moss boxes.
John
Posted by North Lancs Ringing Group at 11:50